My day with the cannibal tribe ‚Small Nambas‘

Got some time between my two dives so I am going to show you the pics from maybe the best day of my vacation… This morning I went diving at the SS President Coolidge – a 200 m /600 ft) long luxus-liner that sank here at the coast of Espiritu Santo during WWII. Unfortunately visibility was bad due to all the rain yesterday. Since it stopped raining last night I hope that it will be a bit better later today or tomorrow. Going diving for 3 days now and the 2nd dive tomorrow will be my 500th. 🙂

This is what is left of the airport of Malekula… 🙂 Initially I didn’t know that the rest of the building burnt down so when I arrived I started to laugh when I saw the ‚airport‘. 🙂 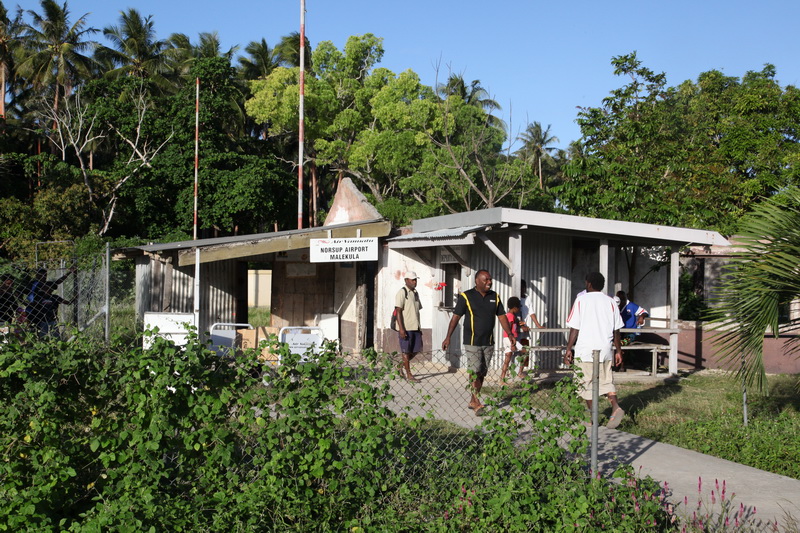 Me in the garden of Nabelchel Bungalows 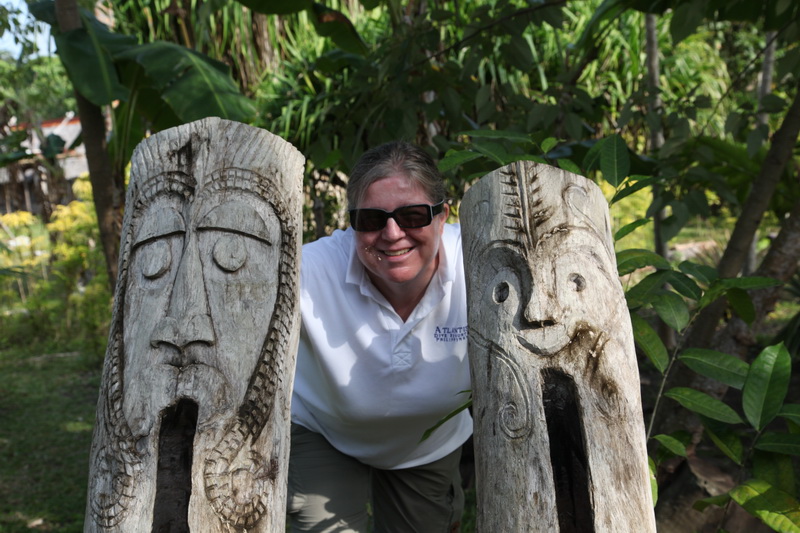 This is already at the cannibal site. This is the spot where the bad guys were killed (I didn’t kill HIM 😉 – he was a nice guy). 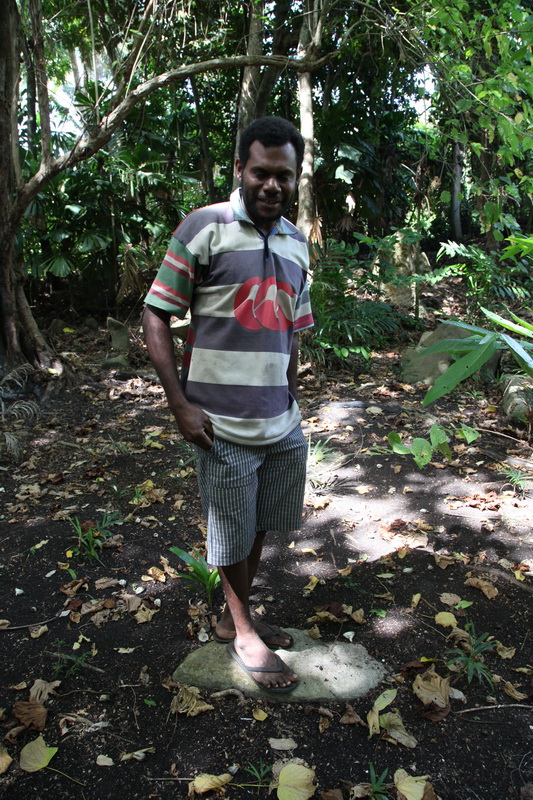 I think that this was the seat of the chief of the cannibals (or his kitchen? I should have brought my book to write everything down)! 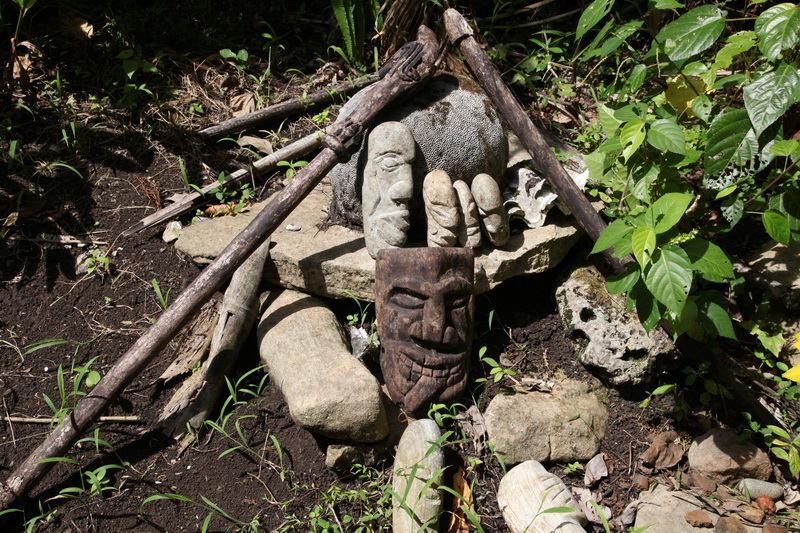 This is a grave of one of the chiefs. They were burried upright and the head stayed outside. That was so the head was not below the feet. About a month after they wer burried a little temple was built above the skull. Till today the tribe feels that their spirits are still there and the currenct chiefs go there e.g. when a cyclone is coming and praying to the spirits that it won’t be bad. 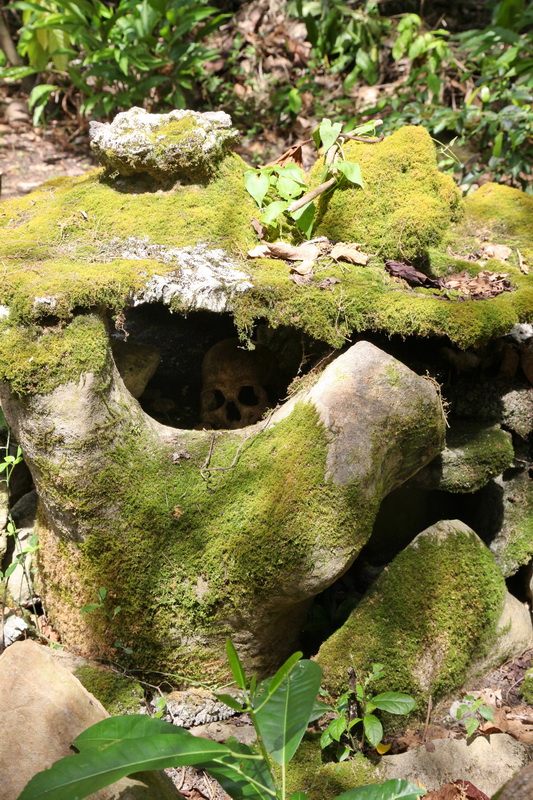 Chief Almede blowing the conch. This is the former ‚telephone‘ 😉 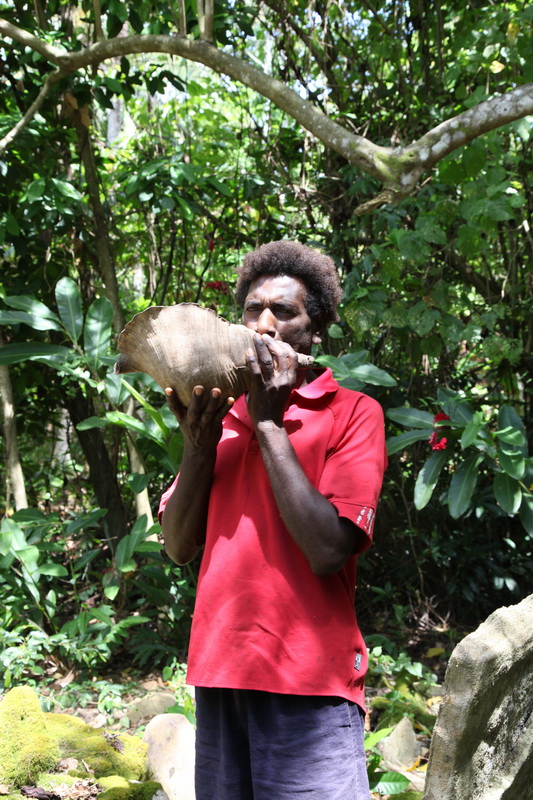 Claude and Lizzie (you will see Claude later on on the pics from the dance). 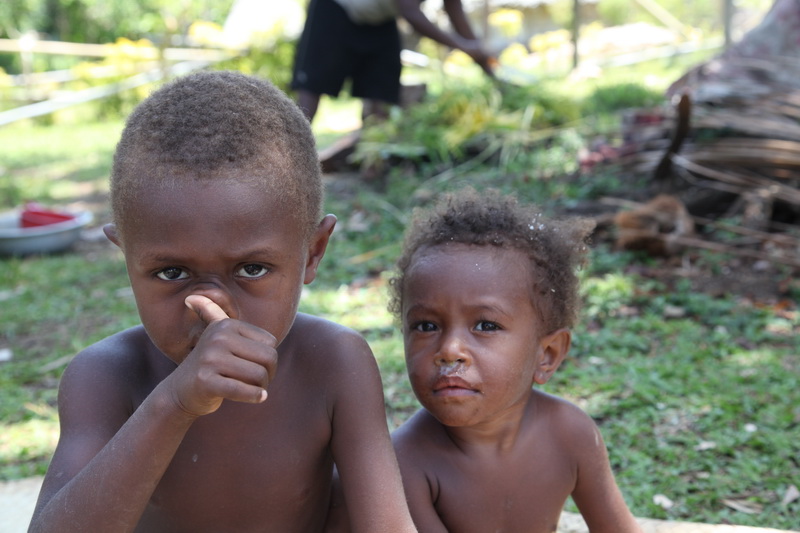 This pic is for my niece  who LOVES her Winnie Pooh. 😉 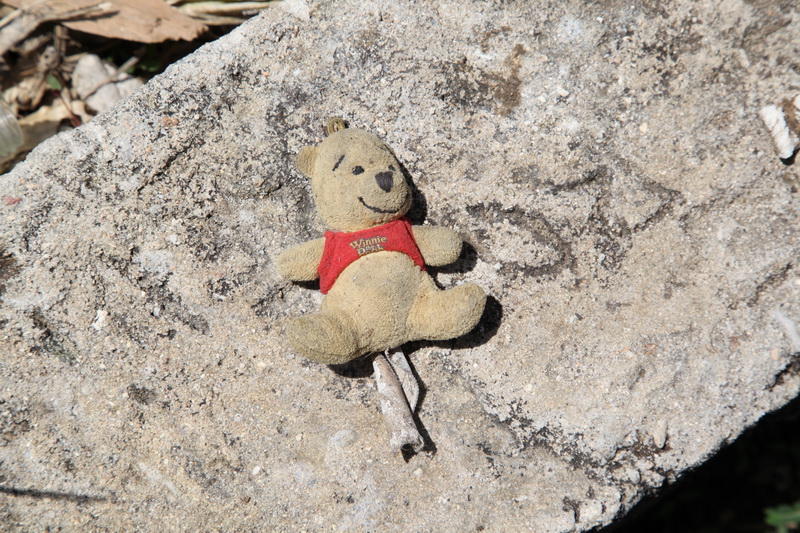 This is a stove in the Small Nabma Village 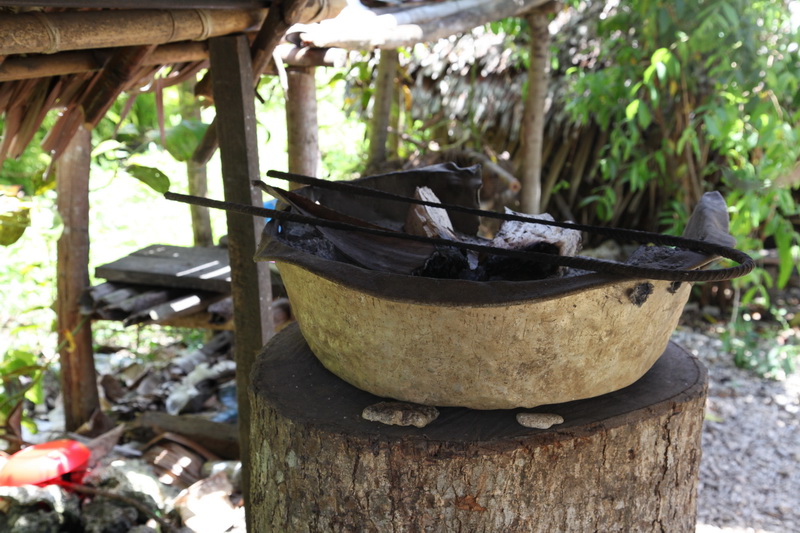 Veronique with her pig. If you own a pig you are considered a bit wealthy. 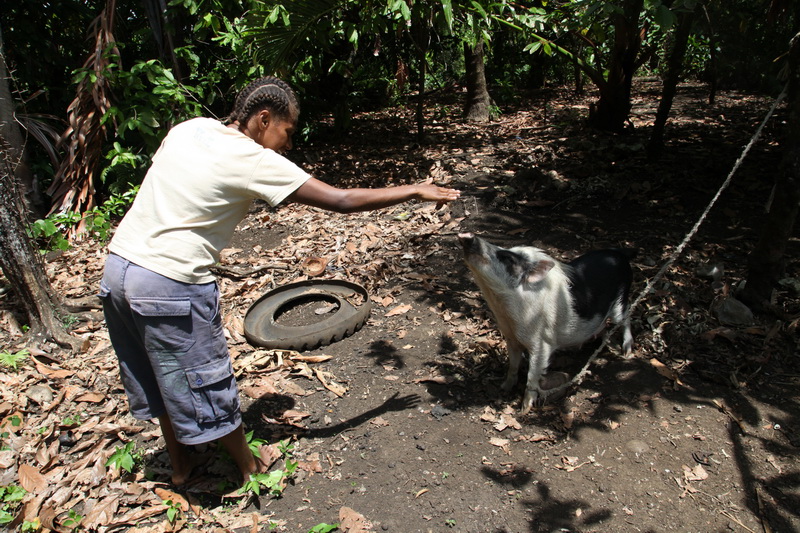 Veronique’s garden. If you are building a family you are expected to be self-sufficient. So everyone has her/his garden and lives from what they are harvesting from there. They have a lot of stuff like wild and normal yams, papaya, mango, spinach, bananas, grapefruit etc… 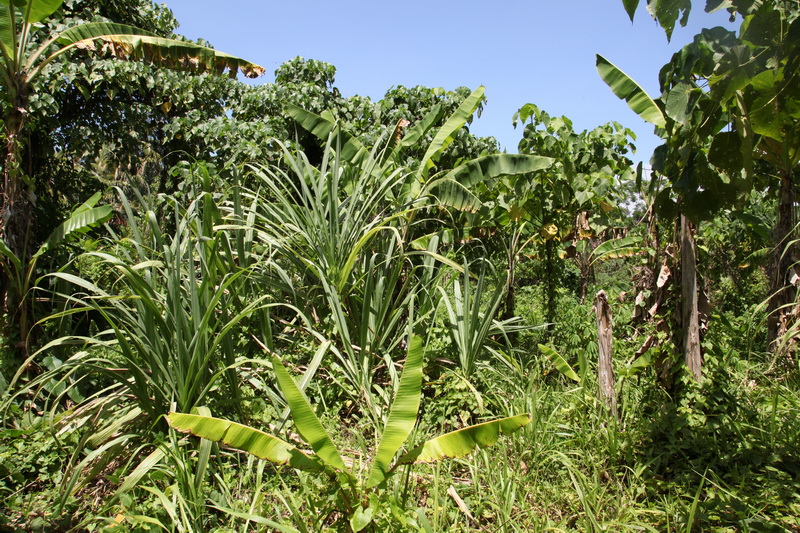 The grave of Veronique’s grandfather. I assume that he was a chief too since her dad Almede is the current chief. 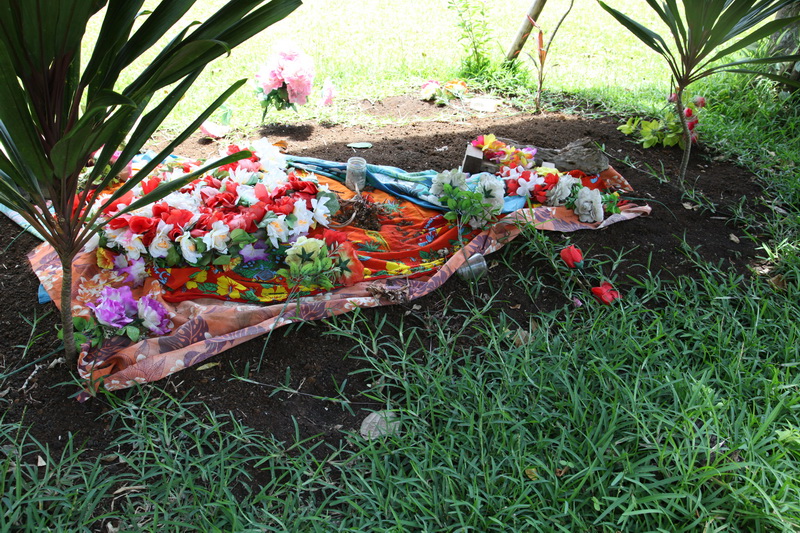 Doesn’t she have the most beautiful eyelashes? She was a bit sceptical with me at first but didn’t start to cry. But after a few minutes she did smile at me… 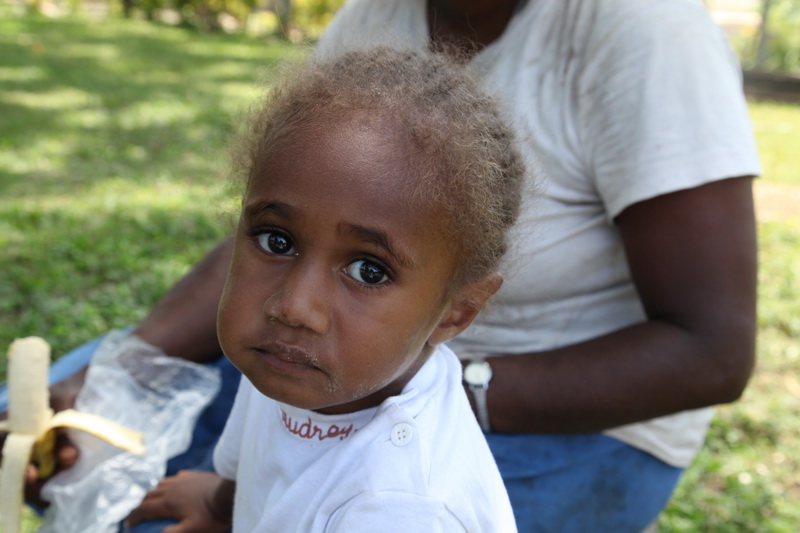 The village. Each family has at least two houses: the ‚house‘ and a kitchen (the smaller one). 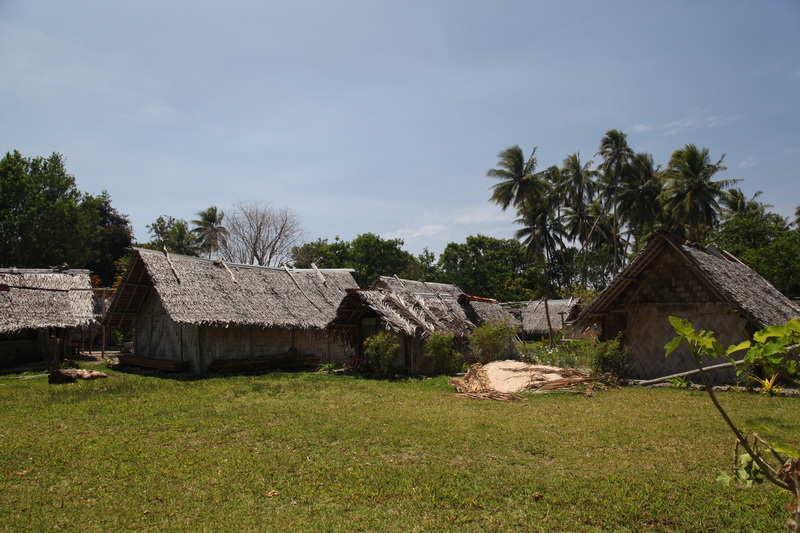 Monique’s mother in law. A very sweet person. She has 6 children (5 sons and 1 daughter) and stayed in the village after her husband died of diabetes. Her husband was a teacher and taught her some french so we chatted all day in french as best as we could. I think she liked me as she told me to come back and stay in the village. I think she has the old traditions in her blood (watch out for her in the pics from the dances.. 😉 ) 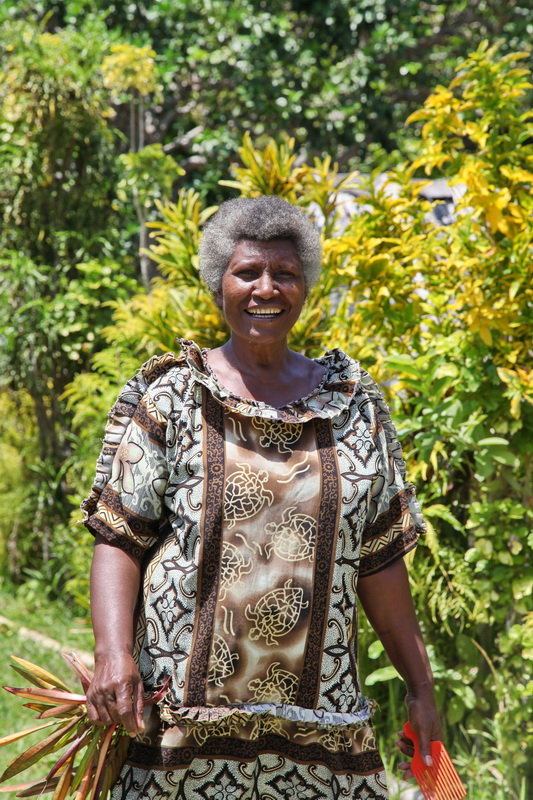 Veronique with her two kids and three girls who are probably cousins of her kids. 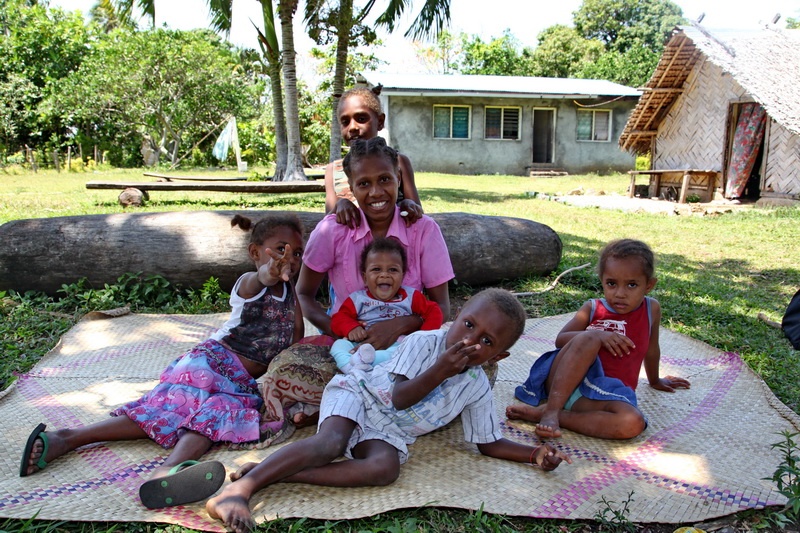 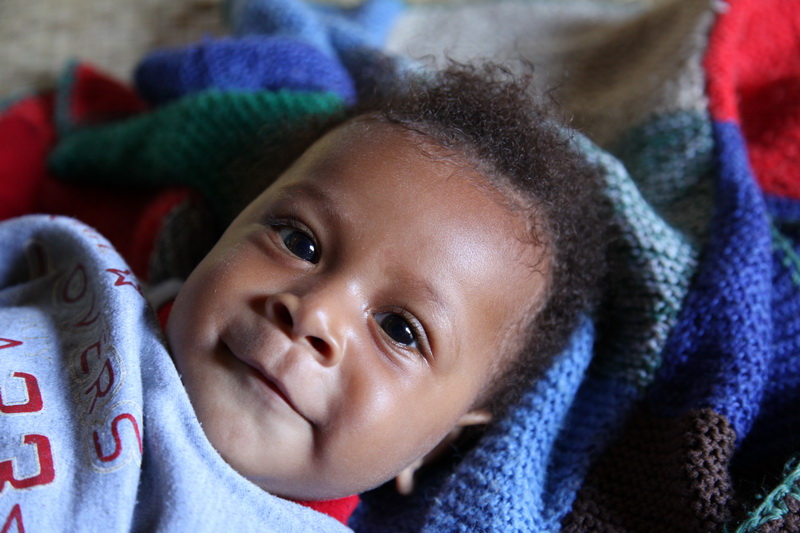 Lizzie was funny, she kept loosing her trousers… 😀 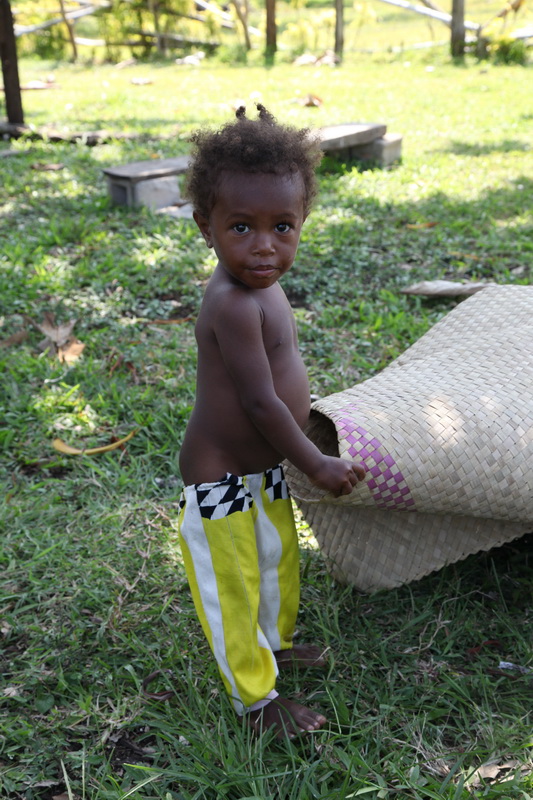 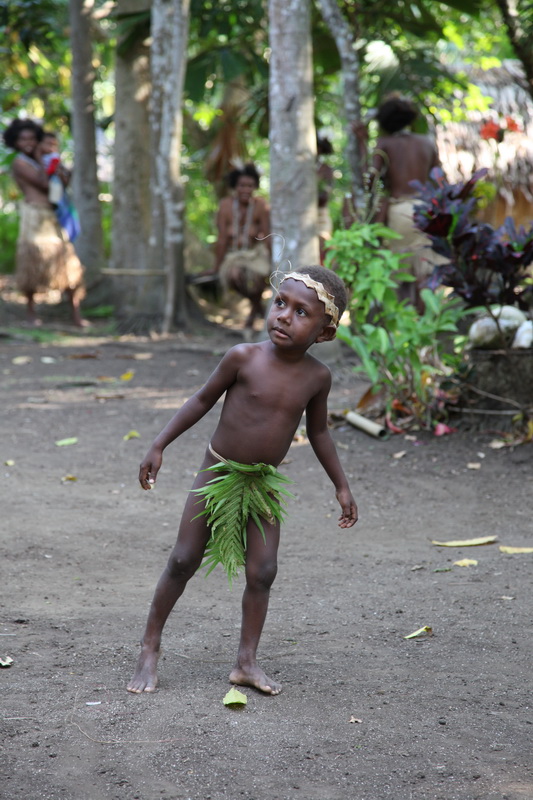 This is already the ‚man dance‘. It is funny… I saw most of the guys earlier in the day wearing normal clothes but with the costumes it is difficult to recognize them. Not sure why because they are still the same, just different clothes… 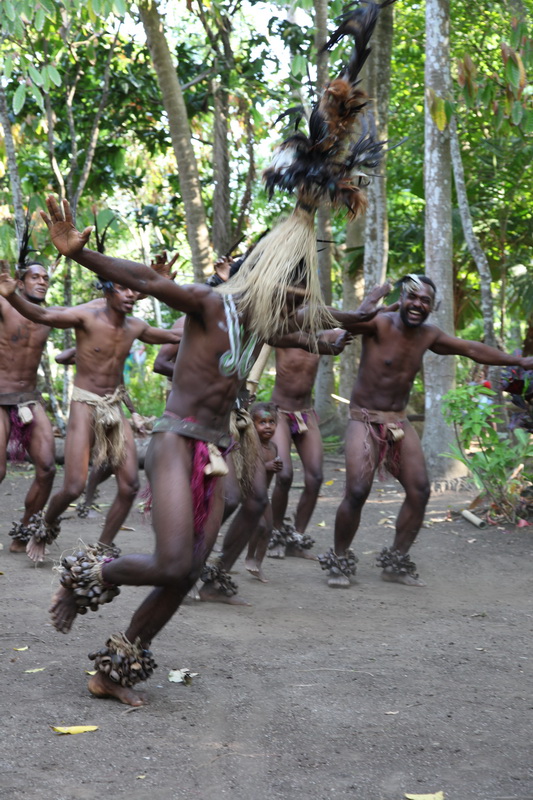 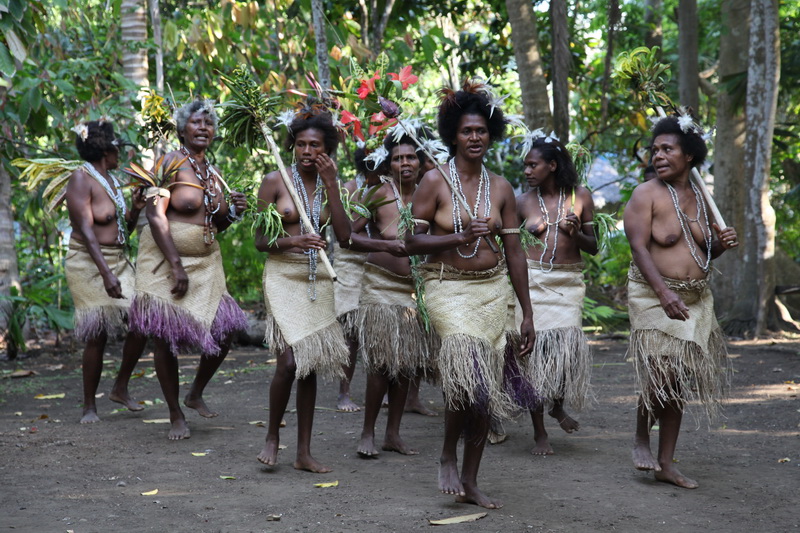 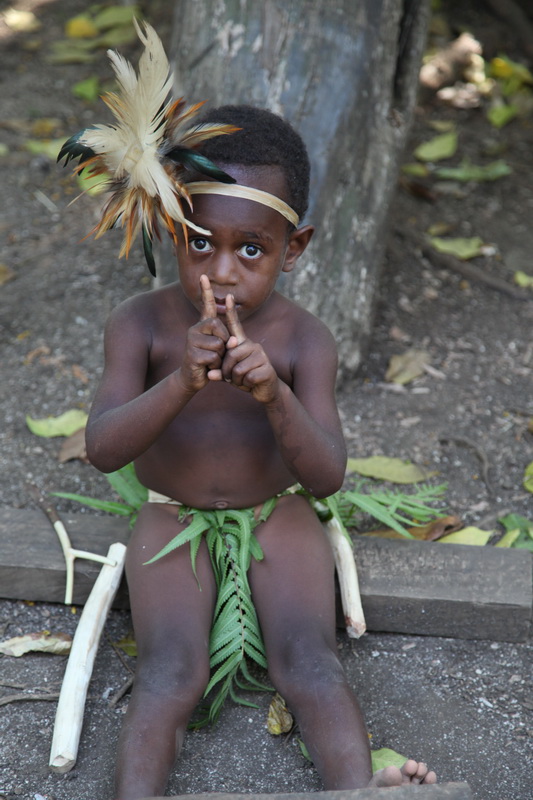 The came running in with different head-wear… 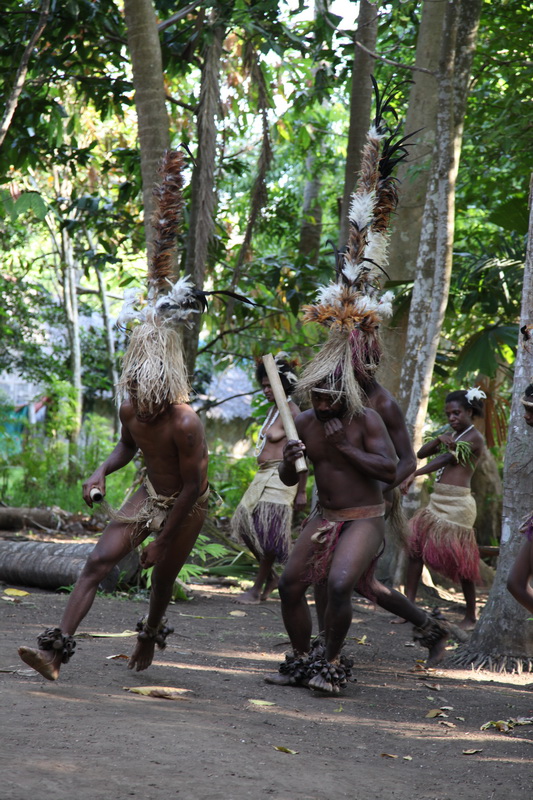 Stomping around so the bells made some ‚music‘ to the dance… 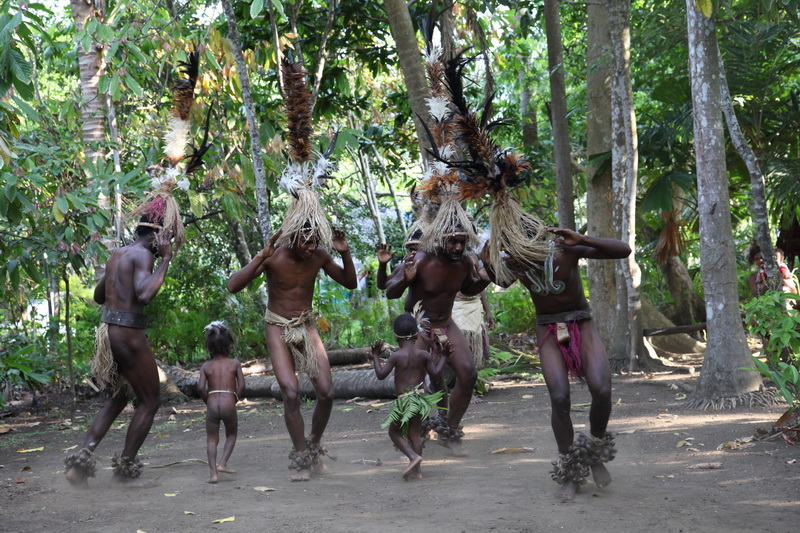 She was so much fun… 🙂 Here we were shown how yams-lap lap is being cooked. First the yams get peeled (like potatoes), then it gets grated and mixed with water so it is some kind of pulp. This gets put into palm leaves and then they are put into bamboo leafes and then cooked. The coconut milk comes later… 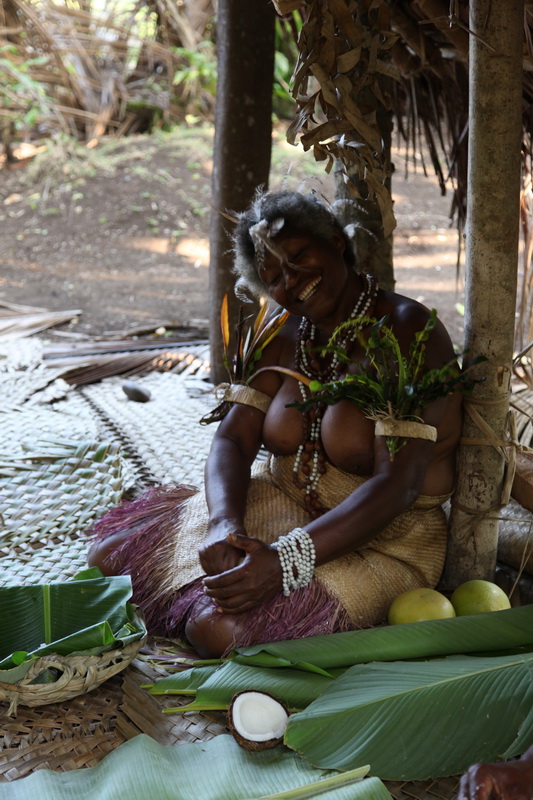 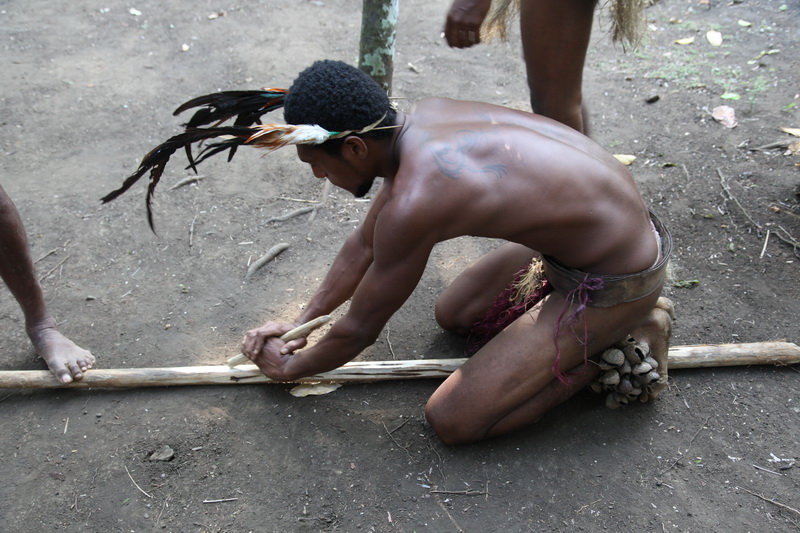 One of the women was weaving mats while this one was preparing the palm-leaf for a roof…. 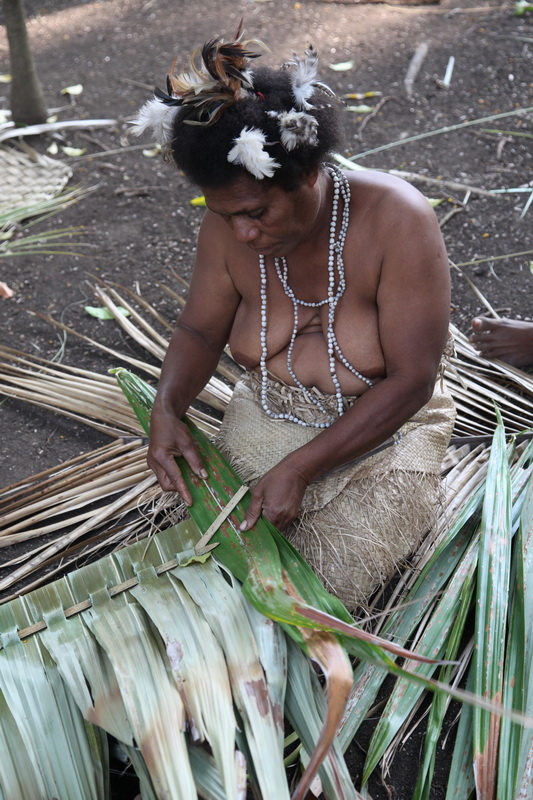 Lap lap is ready…. it gets eaten with coconut milk. 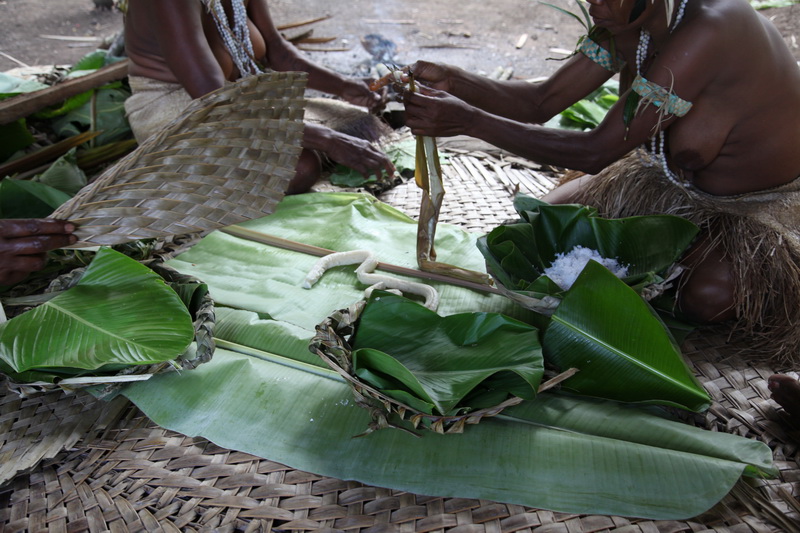 Unfortunately I don’t remember the name of that one. It was the last one before the ‚public‘-dance where everyone can join in. 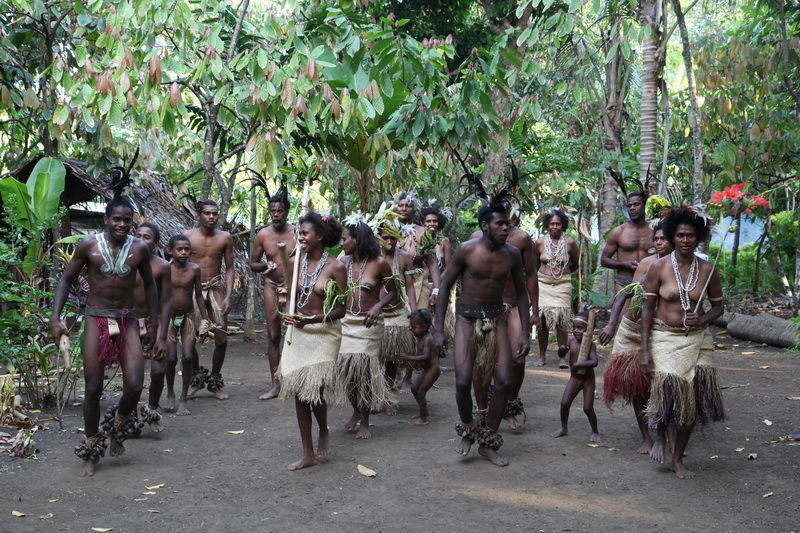 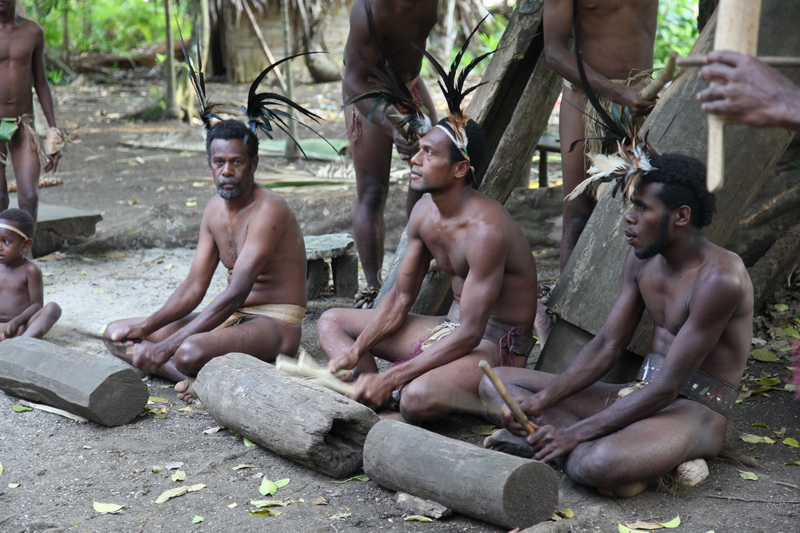 As I wrote in my prior blog entry about that day, it was one of the best I have had here. If nothing else it was very impressing to see how the Small Nambas live. And playing with the kids was fun. I wasn’t half as impressed with the Big Nambas two days later. But that might have been because it was very impersonal. And btw. the reason why these guys here are the Small Nambas and the other ones are the Big Nambas is that the men here use small palm leafs for their ‚costume‘ while the Big Nambas use big palms leafs. 😉