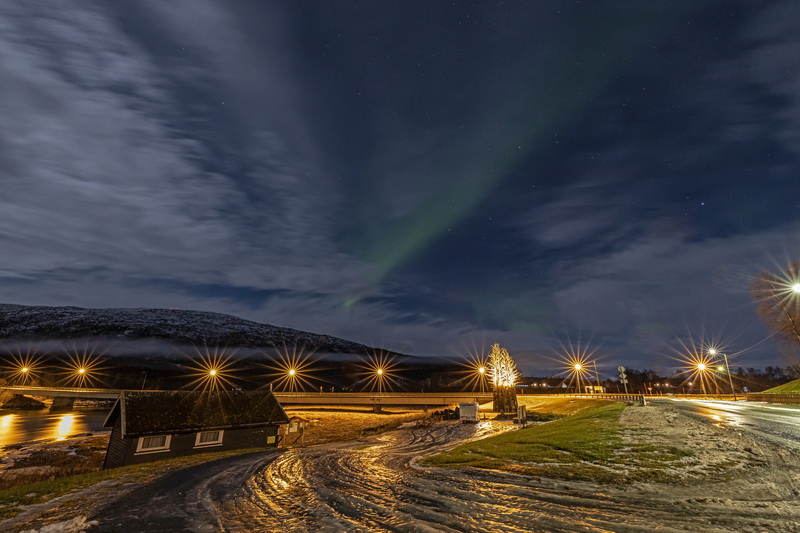 I took an early morning flight back to Tromso (but not too early 😀 ). Last breakfast buffet at the Hotel Marema and then short flight back to Tromso where Marianne came to get me from the Airport. I had booked a different hotel this time to try out the Enter-Hotels but won’t do it again. When I arrived they told me there was a problem with my room and that they had to put me in another Enter-Hotel. Which would have been fine if it actually would have been a hotel but it was not. It was an appartment-hotel. So I had an appartment with a kitchen – which would have been fine if that had been what I wanted. They told me that for breakfast I needed to come over to the original hotel – which again was not what I wanted because it was an at least 10 minute walk and I had to leave for the airport at 8:30 the next morning. I am still mad at myself that I made it too easy for them by telling them that I wouldn’t have breakfast.

While driving into town Marianne told me that she was going on a Northern lights tour again that evening. So guess what…. of course I was going. 😀 I think I slept a bit in the afternoon. Since it was raining there was nothing much to do anyway. Walked to the shopping center to have a last glimpse around, bought some souvenirs and had a last dinner at Egon’s. Tromso – as the rest of the world – was visibly lacking tourists. When you walked around in the evening a lot of restaurants were empty. And the staff at the ones I ate was young and inexperienced. Which is nothing I am criticizing – just an observation as I think that the lack of employees in the restaurant/bar/club-business is universal as well. Same as the airports: on most airports I have been in 2021 the only shops still open are the Duty Free-shops. Everything else is closed. Which is really a shame and I hope that once things get back to normal there will be more shops again.

Back to the last day in Tromso: Marianne picked us up later than usual as the sky was still cloudy. This time we drove south as the sky was supposed to clear from the south. We did some ‚trial shots‘ when we finally could see some stars but no green. At some point there was a picturesque bridge so we stopped to take pics of it. There was a full moon that night so the landscape was illuminated. We stayed at that bridge and played around (I did some light-painting with cars on another bridge) when suddenly one of the group pointed out a green stripe. So we ran over (actually we didn’t really run as there was pure ice on the street) and took some pics. But it was not dark enough so we walked over to the other side of the main street where we had been taking pics. Unfortunately by the time we arrived at the other side the green was long gone and didn’t return for the rest of the night.

We continued to drive around, stopping here and there to take some ‚full moon‘-pictures. It was an exciting night even without the Northern lights. Back at the hotel at 4 AM (I am too old to party throught the night ’sigh‘ 😉 ) and at 8:30 Marianne came back to drive me to the airport. Once again a BIG thank you to Marianne!!!! Without her and her tours my trip wouldn’t have been the same…

Flight back was uneventful. Arriving in Frankfurt I found that there was work going on so not a lot of trains were going to Cologne but I finally was back home with a slight delay after a wonderful trip… Norway – I will be back! 🙂