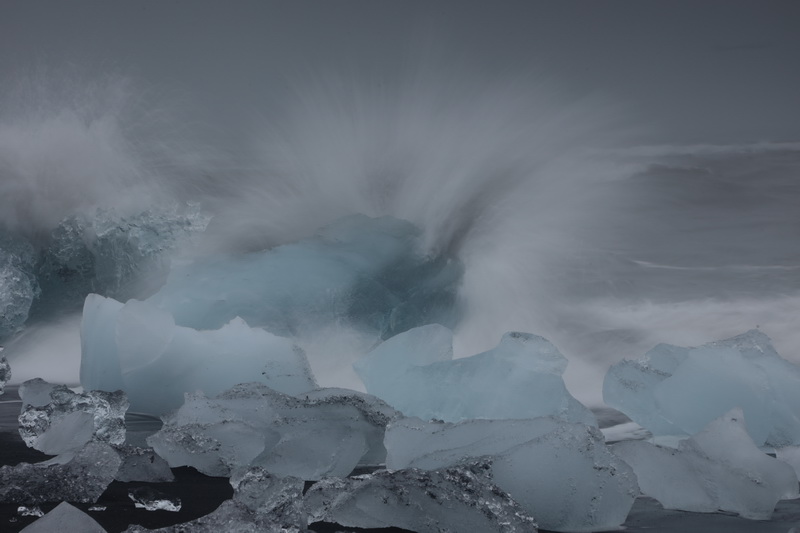 I should probably say that day 8 was diamond beach day… 😉

But to start from the beginning… we left the Viking Cafe after another great breakfast and our first stop was Höfn for a few geocaches because it was …. RAINING. Again… Our plan for the day didn’t involve a lot of driving so we took our time. After Höfn we went to the diamond beach where we found lots of blue icebergs. Some of them were about 3 m high so they were not small. Unfortunately there were a lot of people there so it was rather difficult to take pics without any people on it. Looks like if someone wants to be on Instagramm he or she doesn’t care if someone else is around with a tripod to take pics.

Initially we had planned to check in to our hotel after that stop but the weather forecast said that it should stay nice for another hour or so so we went back to Fjallsarlon first and to Jokulsarlon afterwards before checking in to our hotel which was close by. We ate leftovers that evening and then went back to the Diamond beach for sunset. That was great because it was high tide and the waves were battering the icebergs. The ones we had seen earlier in the day had melted but there were new ones and the waves were hitting them so hard that most of them broke.

We had to experience the stupidity of human nature again as well as we saw two guys climbing one of the icebergs which was hit hard by waves. K. has it on video since she was taking pics of that iceberg then… these idiots were lucky they were not thrown off the iceberg. Can’t say I was sorry when they got soaking wet while trying to take a selfie. Mean me wishes them that the mobile phones were damaged… and suddenly you could see them running towards shore again… idiots… 🙁

At the end we had the beach to ourselves which was really great. 🙂