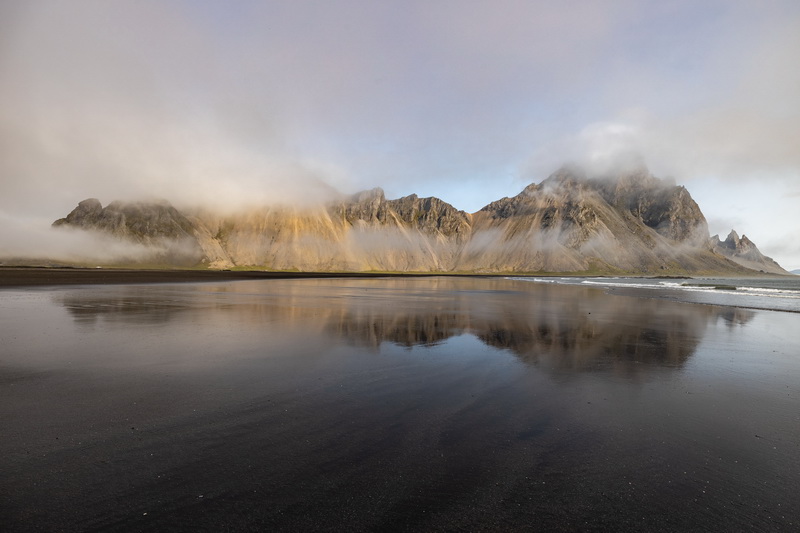 We spent the entire day at the Vestrahorn. Since we stayed at the Viking Cafe where you buy the tickets to actually be able to go out on the road we got as many tickets as we wanted without having to pay extra. The people working at the Viking Cafe were really great. Very friendly and fun. The breakfast lady made us waffles that were very good and she was funny. And the others were very nice as well. Breakfast was good there as well.

In the morning the rain stopped for a while so we went out to try to get pics of the whole of the Vestrahorn range. Didn’t really work. 😉 But high tide was receding so we had the mirror effect on the wet sand. We kept trying and waiting but didn’t really work. To the right of the range there is a mountain the looks like Batman so this is batman mountain.

We went back to our room after a while. Later we went for a photo session with the horses of the farm close to the Viking Cafe. After that we drove out again only to find that part of the road was closed. Probably due to the strong wind. So we walked but it was a bit spooky not to see anything or only shadows of what you would normally see. On the way back we visited the Viking village where last year or 2019 (?) a film had been made. It was interesting though even though for me I couldn’t envisage being able to live there. 😀

Later we went out again but it was very windy and cold so I stayed in the car while K. went to take pics on the beach. In the mirror of the car I saw that the clouds had a gap close to sunset so I went to take a few pics. After K. came back we went to the Viking Cafe where I had a wonderful Icelandic meat soup with bread. Yummmm…. 🙂