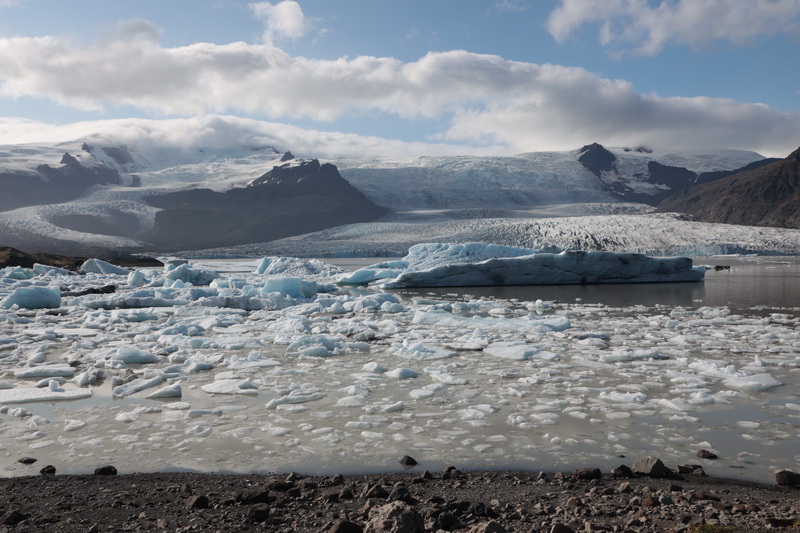 After the wonderful breakfast we left Hotel Volcano and since it didn’t rain a lot we decided to pass at Reynisfjara. It is a very impressive beach with waves that are dangerous and I am not going anywhere near as I have too much respect. There are a lot of danger signs there but still people to too close and in the 4th pic you can see people running because the wave came higher than they expected. The ocean is very wild there. The waves might not look high on the pics but they are. People have died there because they went too close and got sucked into the ocean. 🙁

The next stop was a waterfall called Stjornafoss. It wasn’t raining while we were there so we had time to play around with our cameras and take some longterm exposures. Well, not really LONG but long enough so it looks nicer. K. initially had planned to take a bath in there but in the end didn’t go in. After the stop there we continued our trip towards Stokksnes where we planned on staying two nights. Along the way there are lava fields where the lava is covered by different types of moss. We stopped for some pics and continued. K. wanted to see a glacier. While there are several glacier lakes along the way they are not very approachable. Meaning you need time to get close and that was something we didn’t really have.

Then we stopped at my favorite place in Iceland, at Fjallsarlon glacier lagoon. When I first went there 5 years ago it was not well known and we found it only because my swiss friend wanted to log a geocache there. And Fjallsarlon again didn’t disappoint. I love that place but unfortunately there are boat tours now on the lake so it is not as quiet any more as it has been in the past. But it is still a beautiful place.

Close to Fjallsarlon is Jokulsarlon which has been much more known all along. Because from the lagoon at Jokulsarlon there is a river going to the ocean and the ice going down that river goes on the beach that is now known as diamond beach. Since there were blue skies at Jokulsarlon we stopped there as well to take some pics and then continued our way to Stokksnes.

Stokksnes is not really a village. It is just a radar station. But there is a mountain range known as Vestrahorn that is a known place among photographers and we stayed there for two nights hoping to catch sunrise, sunset and northern lights there. Well… that was the hope. Reality was that I have not even ONE pic where I can see all the mountains of that range entirely. We DID see it but not in it’s entirety. Shortly after we arrived the fog lifted a bit so we went out to take some pics. But we didn’t see everything. Then the clouds/fog came back so we went back to our room. And we got visitors outside. 😀 Rumours have it that they were sent so we would count sheep to sleep better. 😀