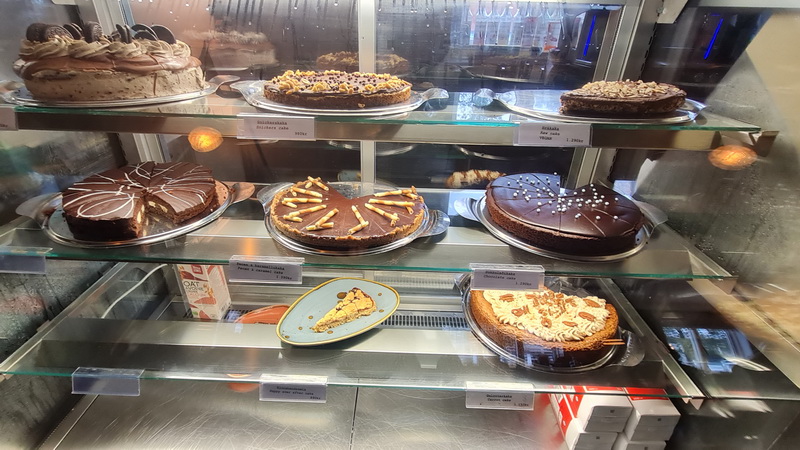 Monday morning we finally started our road trip. We got up early, had breakfast, checked out and K. went to her favorite bakery in Reykjavik to get some sweets. Then we were off – in the pouring rain. We were a bit frustrated that it was raining so hard. Our first stop was at a random hot thermal pool which was kind of a lost place. The name is Skydaskalinn. We had seen the sign ‚point of interest‘ on the road and decided to follow it. Interesting but too wet. Next stop was the ‚ghost town‘ Hveralgerdi. Last time I was there there had been a place where banana bread was baked in geothermal heat but this place no longer exists. We went to other places in the area where there was a lot of geothermal activity and took some pics in the pouring rain.

When we were at Kaffi Krus in Selfoss the day before we had checked when they opened and we had thought that by 11:30 we would already be gone a while but with our stops it was close to 11:30. So we took some pics at the river because K. had seen that island with the one tree on it and wanted to take pics there. In a parking lot across the street we found a bycicle that obviously had spent some time in the river. And then I finally had my Oreo-cake at Kaffi Krus! 😀

From Selfoss we continued towards Vik where we had the next hotel. We stopped in Hella to visit the caves but it was in between guided tours and without tour you can’t go in. Then we saw a sign towards Keldur… we thought it was an interesting village so we crawled along the gravel road – only to find out that we were not interested in the place. But the milk churns on a bench that we found along the road was an interesting photo opp. 😀

After that we went to the waterfalls. The sky had opened up to some blue and it had stopped raining so we went to Gljufui waterfall which is inside a cave. It is next to my favorite waterfall Seljalandsfoss. So we went to Gljufui first as both of us had never been there. It was a challenge to take pics without people inside because a lot of people climb up a rock and want their pic taken inside. In fact the same day I saw a pic on Facebook and I recognized the lady on it as she had been there when we were there. It is a beautiful waterfall though. We didn’t stop at Seljalandsfoss because the plan was to go there for sunset on the way back to Reykjavik (yeah, that was a mistake… 🙁 ).

When we continued there was a big rock with some buildings attached to it that are very old and we stopped to take pics again. Once arrived in the Vik area it was raining hard again so we went to the shopping mall to get something to eat and drink and then we realized that our hotel was not in Vik but 8 km in the direction we had come from. But it turned out that we loved the Volcano hotel. We had the nicest room with a terrace and we would have had a wonderful view to the ocean if only we could have seen it. 😉 Not to mention the wonderful freshly baked bread that we got for breakfast the next morning… good choice.