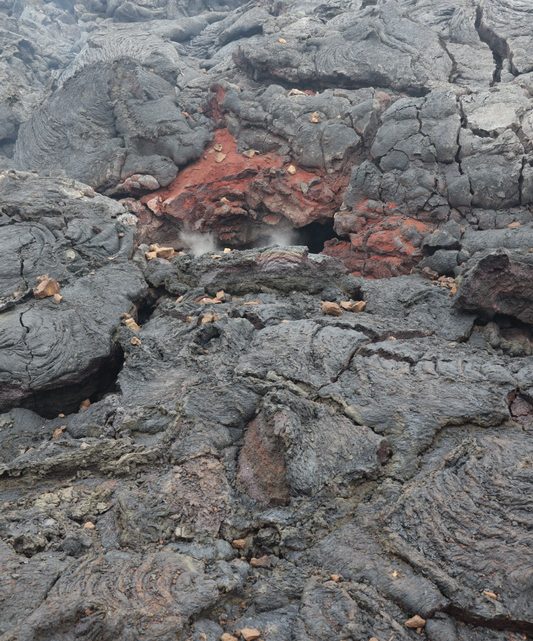 That day was originally planned as ‚puffer‘ in case I got stuck in Greenland – which happens sometimes. Since we stayed another night in Reykjavik we went on a tour in the area. The original plan was to go to the volcano first although the weather was not nice and on the webcam we could see that you couldn’t see anything next to the crater. While driving over the first of the many dilemmas started… there are two things in Iceland that are missing: public restrooms along the main roads and parking spaces on nice lookouts to take pics. 😉 So while driving towards the volcano we decided to go to the Blue Lagoon to look for restrooms. So far I knew that the Blue Lagoon is a lagoon that is obviously blue somehow and that you can buy tickets to swim there. When we came close to the parking lot we saw a little river with milky white water that on some places looked bluish. It was really beautiful and I have to admit that I didn’t expect that. So we went for a little walk to take pics. After that we continued towards the volcano with a stop in Grindavik where we finally found restrooms at the gas station.

Fortunately we didn’t miss the parking lot for the volcano. Unfortunately it was raining. We decided to go at least to the lavafield, which is two valleys below the current crater. But me with glasses and rain – that was not a lot of fun because I didn’t really see anything. Shortly before we reached the dam of the lavafield there was some work done. I had read that the icelandic people had put some trial pipes in the ground and now they are waiting for the lava to creep over it and to see what happens to the pipes. That is important for them to know because ultimately the lava is going towards the road along the ocean and there is important infrastructure (cables and pipes) along that road. So they are trying to find out if that will be destroyed or if it can withstand the lava.

When we reached the lava field I was surprised how much lava is already in the valley. I had seen this valley without any lava on one of the webcams but by now the lava must be about 5 metres high. Unfortunately a lot of people walk on the lava although authorities keep warning NOT to do that as the lava underneath is still hot and if you break in you will burn. Unbelievable how many tour groups were on the lava when you think the guides should know better. In some parts the lava was still smoking (and stinking 😀 ) but we didn’t see any orange flow.

From the volcano we continued to Strandkirkja, a church on a beach. After that we stopped in Ölfoss where we found a viking boat-statue and a very modern church. Finally we arrived in Selfoss where we had a late lunch/early dinner at my favorite Kaffi Krus. I was eyeing the Oreo-cake but since it was already late I finally decided on pasta.

From there we continued towards Thingvellir National Park. In that area we stopped a few times when we found nice rivers and a canyon. And we stopped at the final area of the Silfra fissure which is the fissure between the american and european tectonic plates. Driving back towards Reykjavik we stopped at the church in Mossfelladur as it has a very special architecture. And once arrived back in Reykjavik we drove up to Perlan again since K. hadn’t seen the view over Reykjavik yet. Yes, it had been a long day but we were happy with all that we had seen. Even if the weather could have been a bit better…