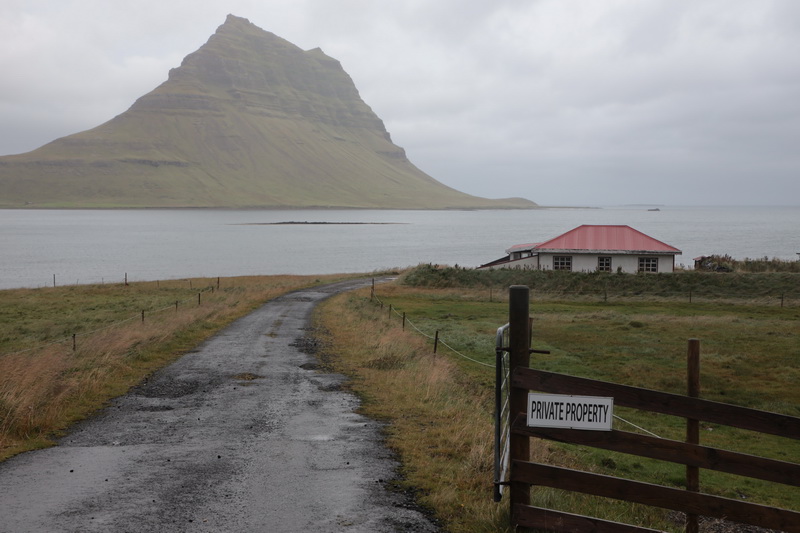 That was our last day as our flight was early the next morning. The plan was to drive around the Snaefellsness Peninsula, then after the stop at Budir with the black church take the road back to the other side, drive by ‚our house‘ again, take the road back to the other side again and continue. So this is what we did. We stopped at several points during the drive around the head of the peninsula. At Budir we were lucky because obviously there was a wedding at the black church and we were there when the bride and groom arrived.

Behind Budir we went over the mountain to the other side again and that was a really beautiful road. We drove by Kirkjufell and our house again. On the way over to the other side of the mountain again we stopped. K. got out of the car and the wind took the door out of her hand. Unfortunately when the wind slammed the door shut her finger was in between. She refused to go to the Emergency room in Reykjavik but she was in a lot of pain for the remainder of our trip. 🙁

Again the weather wasn’t great that day so we stopped a few times. K. wanted to take a good-bye stop in Reykjavik so we went into the city again. After that we went to our hotel, the Lighthouse Inn, close to the airport. Our idea had been to take pics of the lighthouses with the northern lights but since once again it was raining hard I didn’t even take pics of the lighthouses. I can recommend the hotel as it was great. They even offered us a breakfast package since we had to leave very early but we didn’t want that.

So all in all we had a good time in Iceland but it was not what we had hoped for. The weather was not good and we didn’t even have one half day of sun. Iceland could have been nicer to us. Our planning had been good and we would have had the time of our lives – if the weather had cooperated. But since we can’t influence the weather we made the best out of it. 🙂 Thanks, K., I had a great time with you in Iceland!