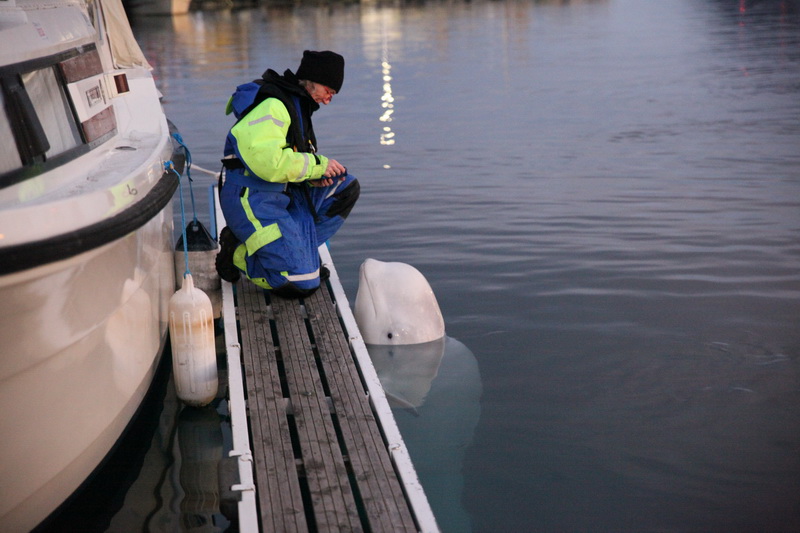 Again… when you wake up in the morning you never know what to expect. And that was more than true for that day. As usual we got up early and went on our Sunflower-fishing-vessel. When Uwe was about to come over with the zodiac suddenly there was white head popping up next to the zodiac. We would never have expected that. Currently there is just one beluga whale in Norway and his name is Hvaldimir (hval being the norvegian name for whale and the rest is for the russian president Wladimir Putin).We would never have expected to see him. I had read about him showing up in Norway but had never even thought for a second that I would see him. From what I saw that morning I think he is either lonely or too used to human interaction. Both are not good. The people from Norvegian Orca Survey who took care of him after he showed up in Norway were in Sorkjosen too so they had a chance to check him out and found him OK. But anyway… never try to domesticate a wild animal. Not good!
After everyone had seen Hvaldimir it was already too late too go over to the other fjord like the days before. So we stayed in ‚ours‘. Fortunately the sky once again gave us lots to look at and take pics of. Rainbows too… close to going back to Sorkjosen we had some orcas.
Once we were back I got ready for leaving. Anja brought me to the airport around 7:00 and my flight was at 8:10. I think we were 9 passengers on the flight. I tried to see some northern lights during the flight but the windows mirrored too much of the light. We landed in Tromso on time and by 9 PM I was already happily reunited with my hawaiian friend Kim. It was sooooo cool to see her and I was really happy that we could make that happen.