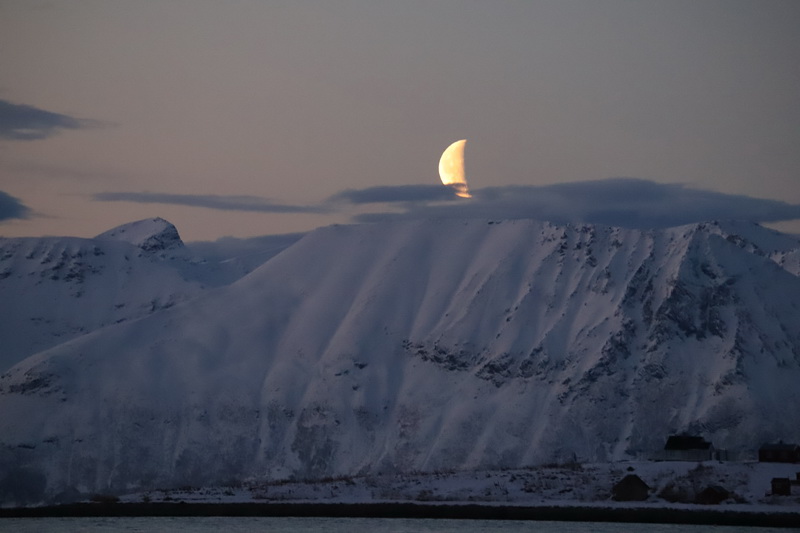 Day 5 on the water – and my birthday

When you leave in the morning you never know what to expect during the day. There is a weather forecast that may or may not be right 😉 and there are expectations that may or may not be met. That day while we were in the strait to go over to the other fjord I sat down looking backwards and I saw a humpback. Turned out that there were way more humpbacks than just this one. The zodiac went out and I think Lia got some cool footage of humpbacks in the water. When they were gone we continued into the fjord and saw orcas. The sky was nice that day as well so we have some dramatic pics to look at. I remember that I looked away from the humpbacks to enjoy the colours in the sky. Once in the fjord we saw some travelling orcas. And not a lot of other boats – just one which was the one my hawaiian friend Kim would go on later that week. The moon gave a picturesque moonset and I loved Skjervoy in the demi-dark. I fell asleep on the way back and woke up only when we were back in Sorkjosen. I remember that Anja asked me if we could meet at the restaurant of the hotel at 5. What I didn’t know was that we had a festive table for ourselves and the other boat and I would get my second birthday cake of the day. On the boat they had already sung for me and I got a pancake-cake with candle for my birthday so I didn’t really expect another one at the hotel for dinner. But it was a chocolate cake and it was REALLLLLLLLLLY good! Thank you, Northern Explorers! Northern lights were supposed to get to start fireworks that night but I didn’t see that. I heard that they were there but not on my watch… 😉