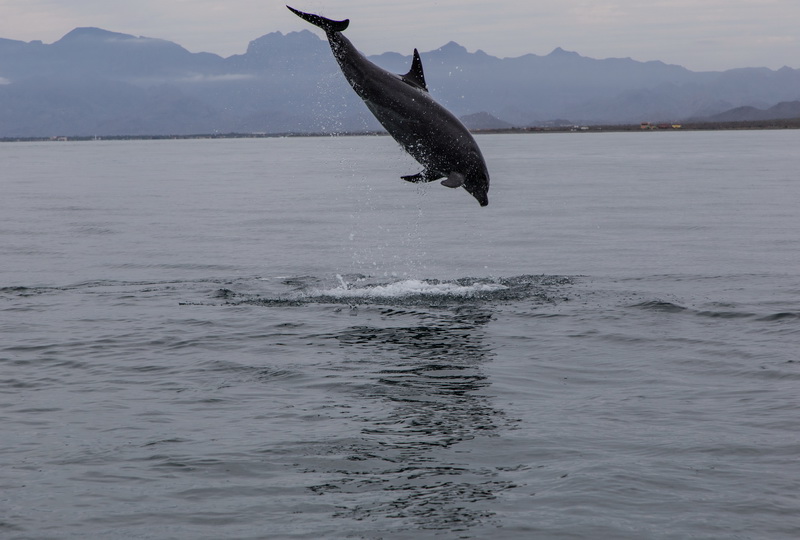 So we went out to go diving again. On the way to Coronado Island we saw dolphins and one of them jumped so high that it gae me enough time to grab my camera and get him on a pic… 🙂 We went to a sealion colony and went diving there. I didn’t take the camera in the water on the first dive as I wanted to enjoy myself. The sealions were playful among themselves but obviously didn’t want to interact with us. It was amazing though that even in a depth of 12 m you could hear them (the ones above water). We saw some endemic creatures of the sea of Cortez, nice nudis and a big shell with a bright pink ‚entry‘ (not sure what it was). But I have to say it was cold… the water was 17° Celsius. When we came out of the water it was still 17° but when you are wet that feels much colder. Capt’n Kiki had hot tea and cookies for us but that didn’t really help too much. So we froze till the next dive which was my 700th. I wanted to take pics again but when Kiki gave me the camera I realized that I hadn’t put it in in a good way so I couldn’t switch on the camera. 🙁 Therefore no dive pics from yesterday. The dive was faster than I usually prefer but we had to move because we were so damn cold… it was still a nice dive with some rays and other stuff. After the dive we went to the beach where lunch was served. Then we went back home. Later the gang met up again for dinner and we had lots of fun. There was a guy close by who was cleaning cars with two towels. And he did that while dancing to the music. It was sooooo funny… we should have paid him something for that show. 😉