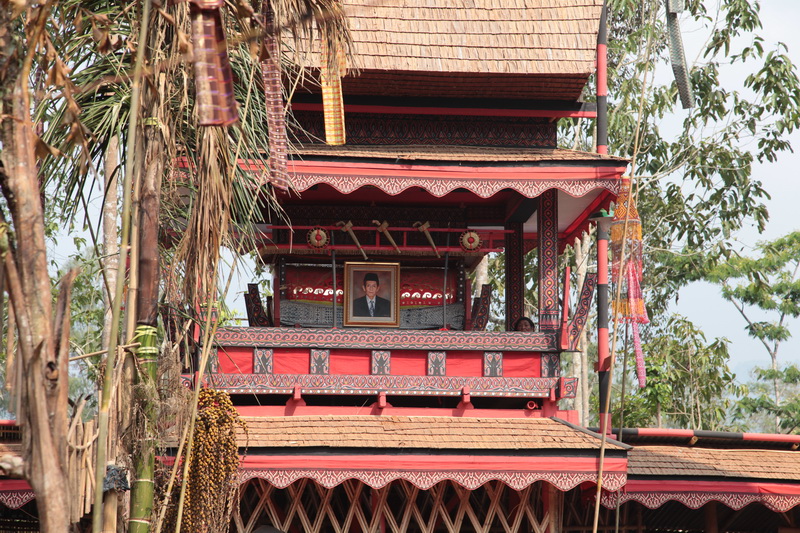 Yes, I know… day 2 is missing but I will write it either later today or tomorrow. I am still under the impression of the burrial ceremony this morning so I would like to start with that one. The guys came to get me at the hotel one hour earlier than usual and first thing we did was buying cigarettes and caramels as present. My guide told me that I should give them only to the children of the deceased and he would try to find them once we got there. On the way the guys had to ask for the right way several times although my guide is from Torayaland. When I heard this I understood why he kept telling me that I should film the killing of the buffalos which was something I intended NOT to do… for him this was something he grew up with and he didn’t understand why I kept telling him that I was not sure I could stomach seeing this.

Before going there he told me a lot about the burrial ceremonies and I knew that two days ago there had been a welcoming ceremony for the guests. After seeing today’s part of the ceremony I understood that this tradition is an important factor for the torajan economy. At the end of this entry you will know why…. 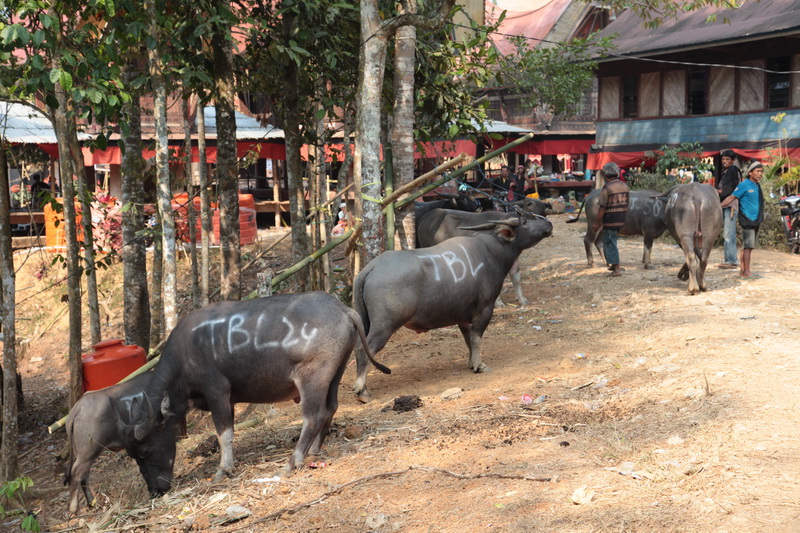 The stretcher where the coffin had been laid out. 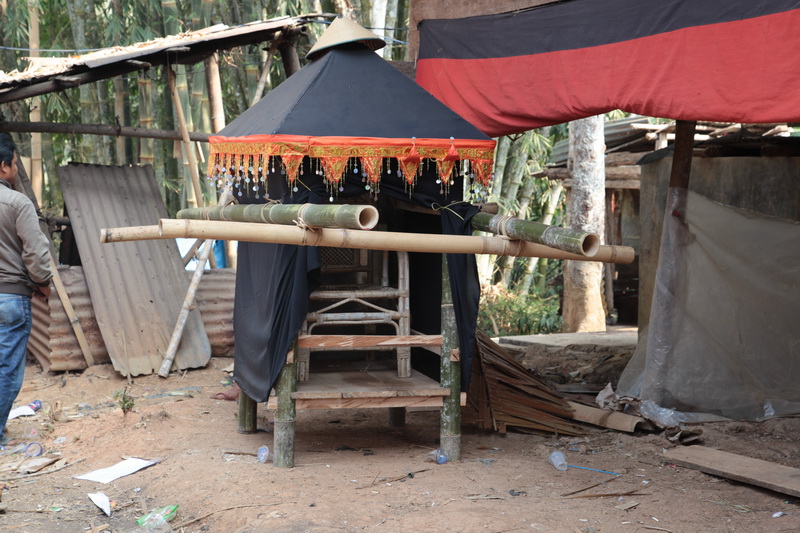 Here you see that they have errected an entirely new building where the coffin is during the ceremonies. The coffin is behind the picture of the deceased in the upstairs area. Later three persons were up there with him to watch the buffalos. I assume that one of them was the widow. 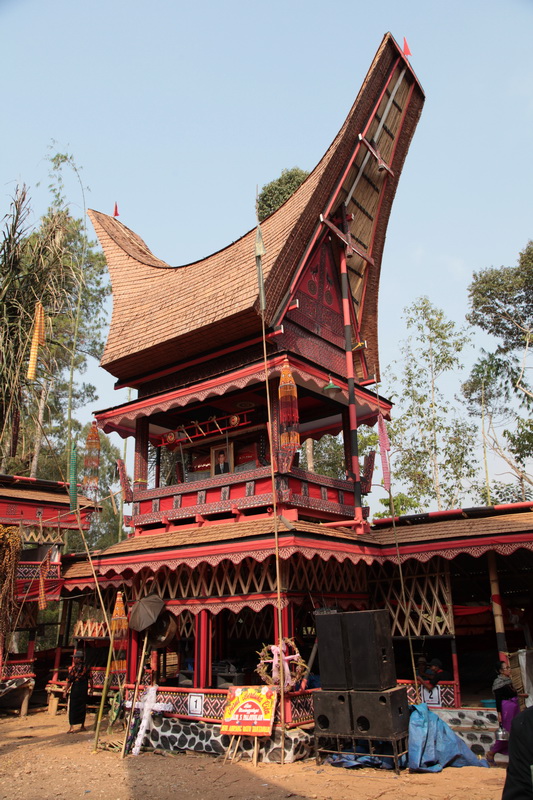 As soon as we had entered the inner area we were approached by a young man who turned out to be a son of the deceased. So we learned that his father had been 90 years old when he died two years ago. There are 10 children and he was the second-youngest. He has only one brother and 8 sisters. And he told us that they had 100 buffalos. 50 bought by the family and 50 bought as presents from others. There is a tradition that when someone gives you a buffalo for a burrial ceremony you have to give one back… I will get back to this later. The good buffalos cost 12.000 USD and if someone buys from for 9.000 USD it is said that it doesn’t come from the heart and therefore it doesn’t really count. Finally I gave him the presents and thought that we were ‚finished‘ and would be going our way when he invited us to his ‚place‘ in the family area where he sat with us and he offered us coffee and cakes and cookies. I never expected something like that but this hospitality totally overwhelmed me. This building was for the welcoming of the guests-ceremony. 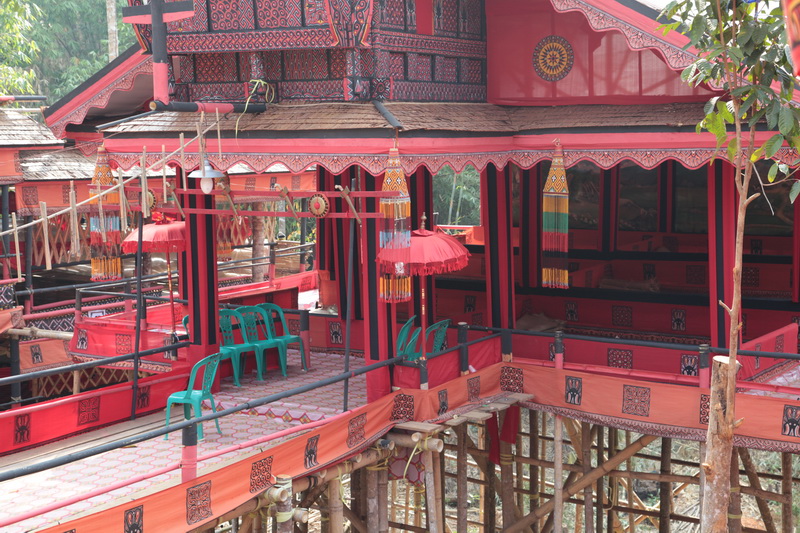 The coffin with the widow (I assume).

I am a bit sad that I couldn’t take a pic of this in use. While we were talking to the son of the deceased some women started to bang the sticks in there and my guide told me that this was the welcome for the ancestors. I wanted to take the pic but it would have been unfriendly to do so while talking to someone. So I didn’t. 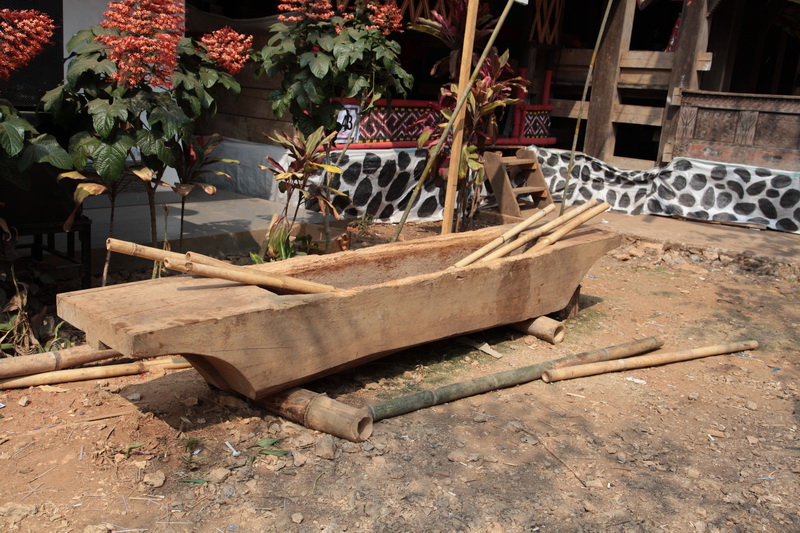 Here you can see that lots of people are coming to watch. And the white signs with names on it show that certain people are sitting there. Let me tell you a bit more about the buffalos and what happens with them. All 100 buffalos were brought in and they got a sign on them telling who bought/brought them. Due to the ‚If I give you one you owe me one‘-thing it has to be written down in detail who gifts what. Afterwards the buffalos were brought in again and then the people you see in the middle decide (sometimes with the family, sometimes without) which buffalo goes where. You see… that is where the economy of the area comes in: a lot of people help with the preparation of the burrial. So buffalos go to the guys who erected the buildings, the ones who prepared the decorations, then there are three buffalos for the widow, 4 were assigned to the church, others go to the villages where the deceased was from and so forth. The meat of the buffalos that are killed is divided among the families who get that buffalo. The ones who are not killed can be sold and then the money gets divided. So this is some kind of ‚paying in naturals and not money‘. What you don’t see in below pic is that the building these people are in are actually 5 torayan traditional houses that have been linked togethere by new roofs between the building. Now I understand why most villages have several of these buildings in a row. They actually use them. 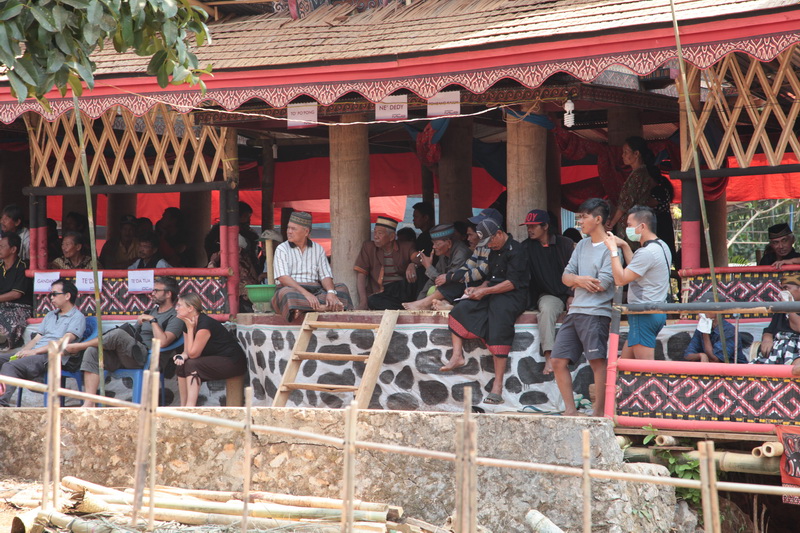 Here one buffalo gets eyed up and written down on the lists. 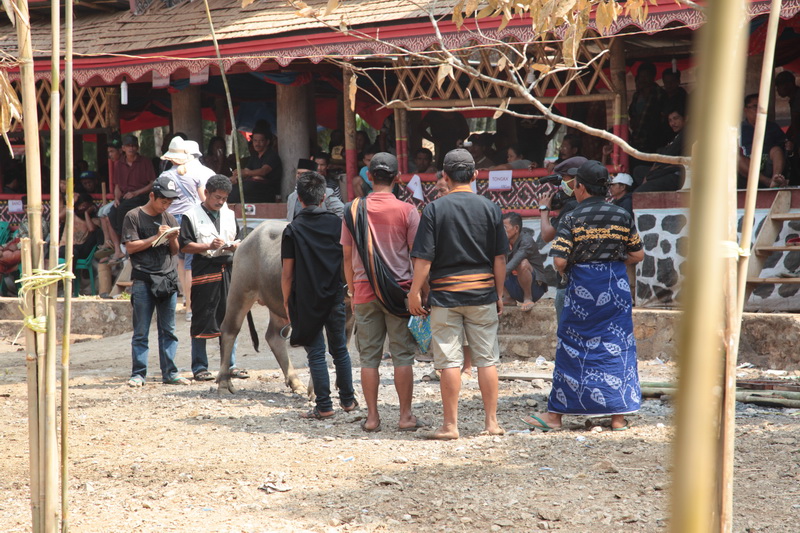 This is my very kind host (who speaks a very good english). He is an engineer and lives in Jakarta. He came here also to baptize his two children (10 years and 4 months old). 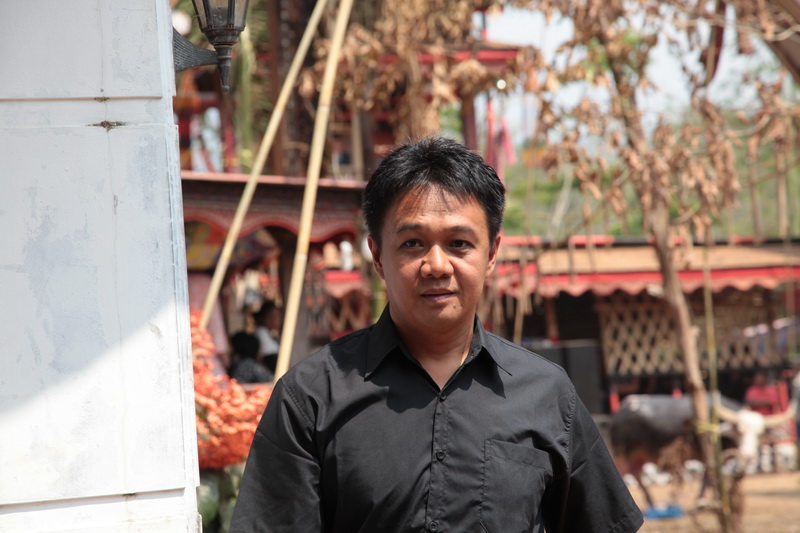 Here someone brings another buffalo and he is wearing a black cloth. Some of the guys bringing them wore them but not all of them. Generally only the immediate family (children) were dressed entirely in black. E.g. the wife of my host wore a black blouse but then she had a jeans-skirt. 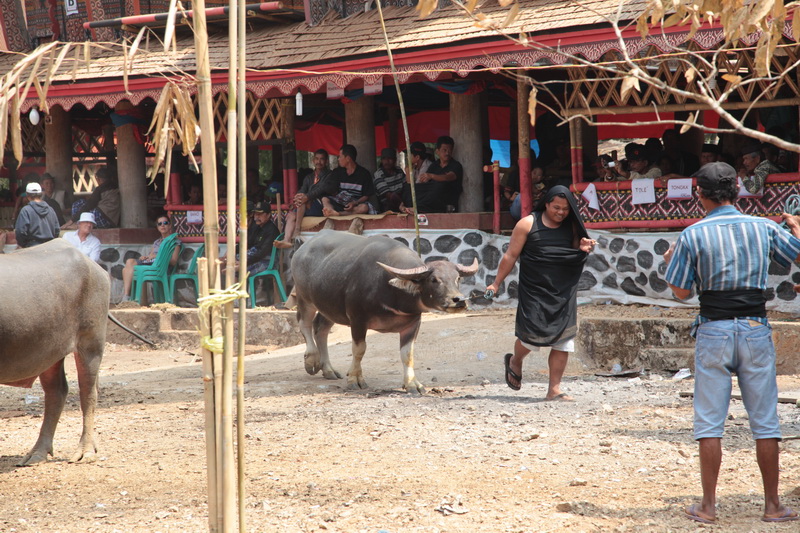 Buffalos waiting for their appraisal… 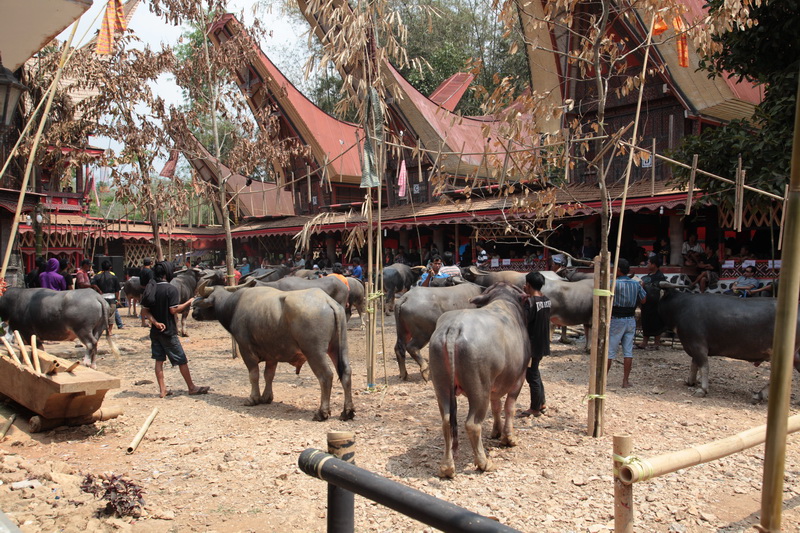 Here one gets sprayed the name of the persons who get it on it. 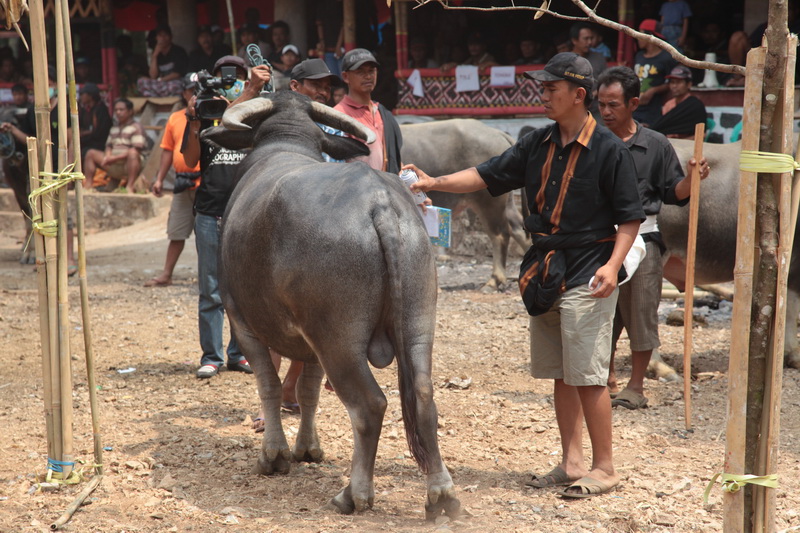 This building is the second one errected for the family. I was in an identical one. Inside it looks a bit like a campground. 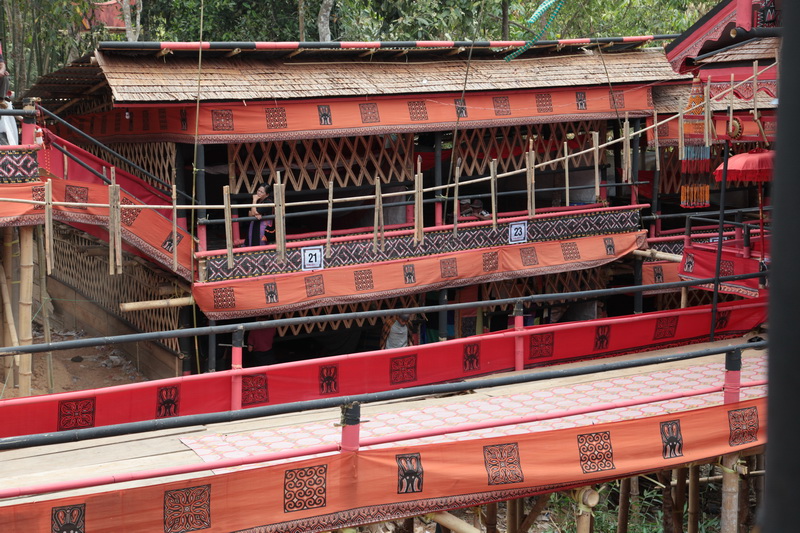 One of the daughters had this booklet so I asked her if I could take a pic. Not sure what is in it but I assume it is some kind of program. And as you can see the ceremony is 20 days long. Her father might have been a farmer but from the number of buffalos alone it was pretty obvious that he was very important in the social hierarchy. 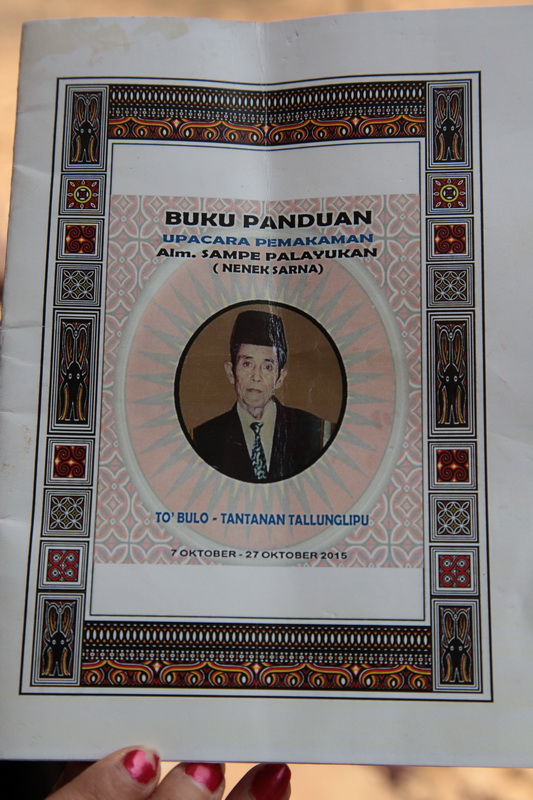 And this buffalo goes…. to two villages (don’t ask me where one name stops and the second starts… 😉 ). 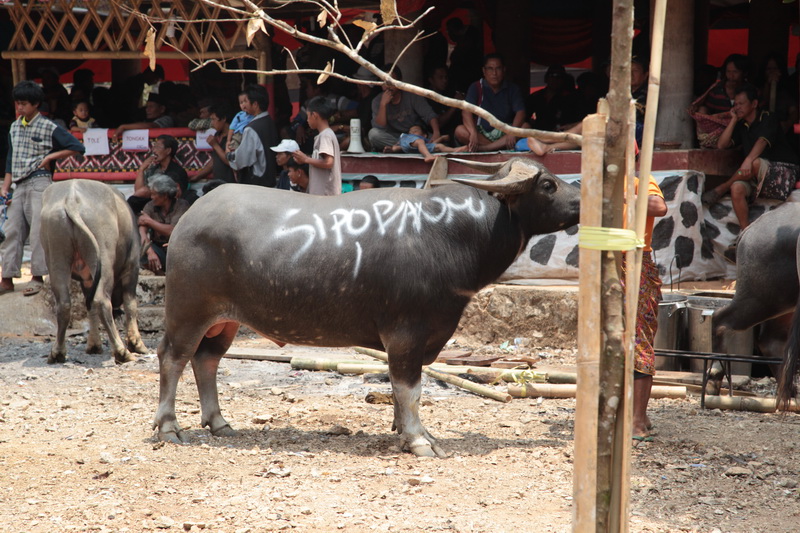 This guy is some kind of master of ceremonies… 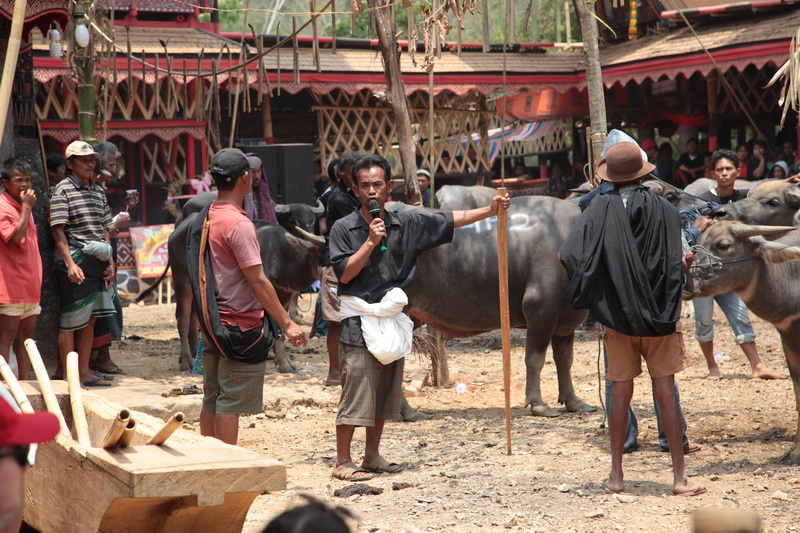 This is where the first buffalo that got killed was tied to. So when this guy started it was clear that the killing was about to start. 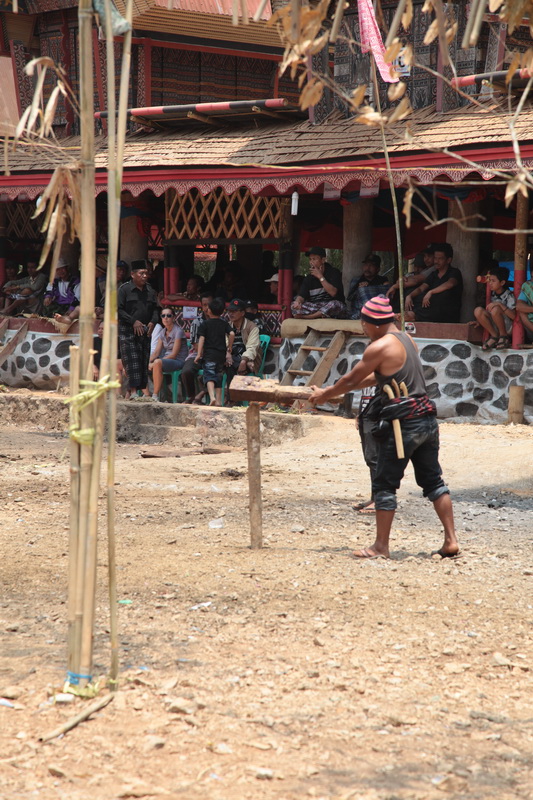 I have decided to post only one pic that has relatively little blood on it. The buffalos got killed by having their throats slit. Two teams were working at opposite ends of the area and the son told us that they couldn’t mix the teams as otherwise they couldn’t divide the meat among the families. I think today they killed about 20 buffalos and all in all they will kill 80. I didn’t like it that much mostly because the animals were not immediately dead. As far as the blood is concerned I didn’t watch to closely. 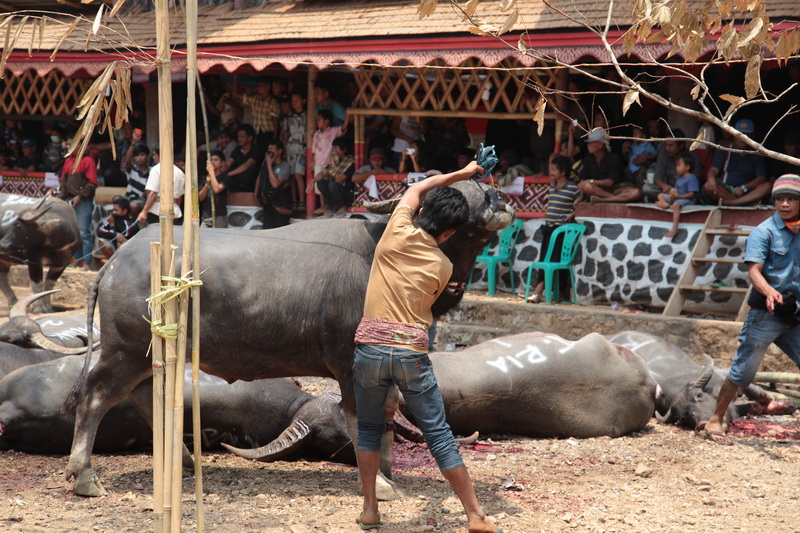 Shortly after I had enough and we left as we had already said our ‚thank yous‘ to the son. In another village we saw the preparations for another burrial – which is for the sister of this deceased one… that family is really busy these days.
Below you see a big toraya building that needs reinforcement to stay up. 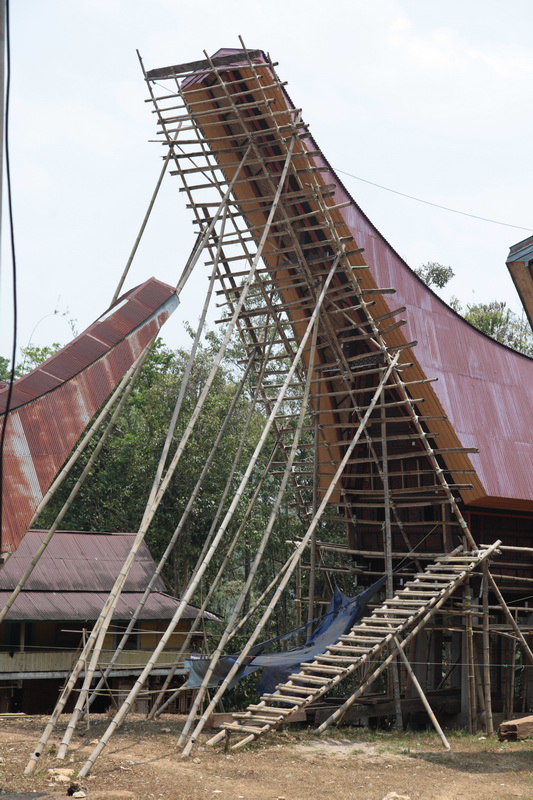 Torayan cemetery buildings (not everyone is burried in walls or caves). 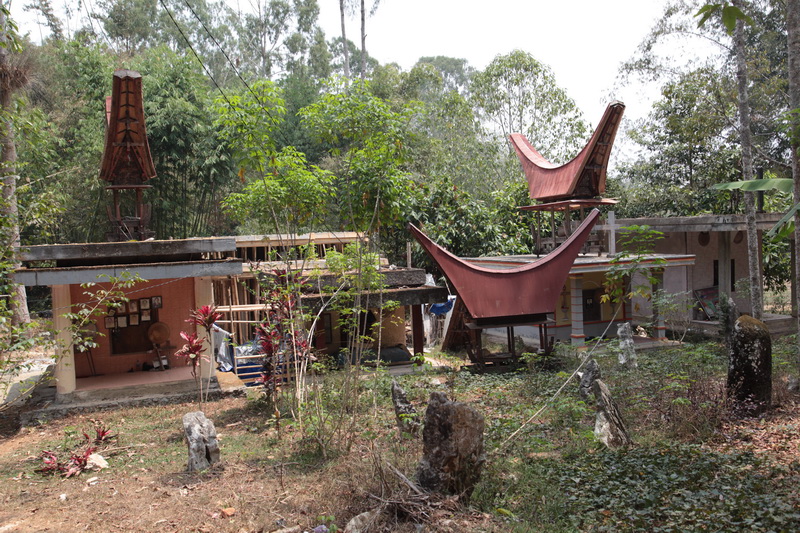 And this is my lunch. To the right you see chicken cooked in bamboo and the black stuff in the middle is pork (it was supposed to be pork but I think it was beef) in a black sauce. This sauce is made from nuts that need to be dried and worked on in a special way because initially it is poisonous. Only after several times of drying and then cooking it is no longer poisonous (at least I still feel well 😀 ). 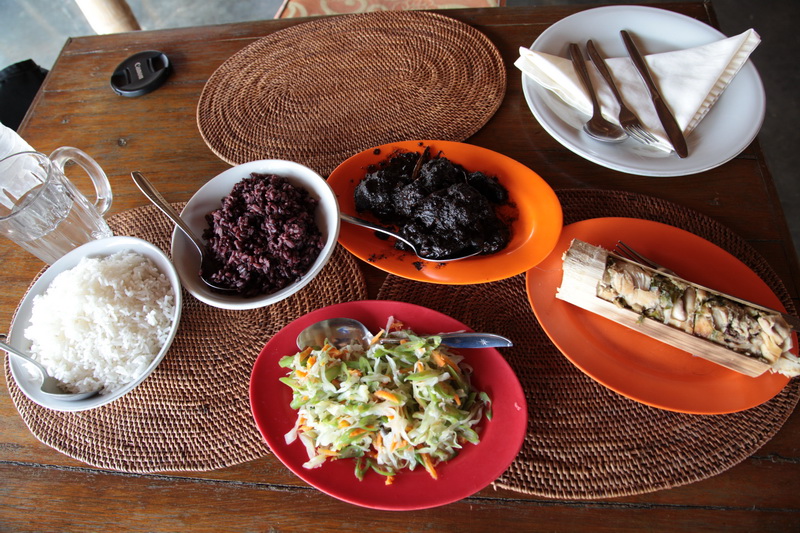 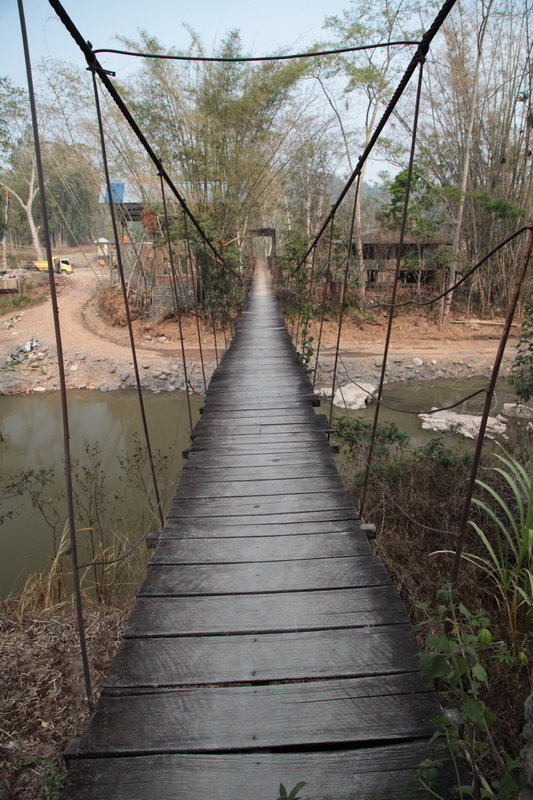 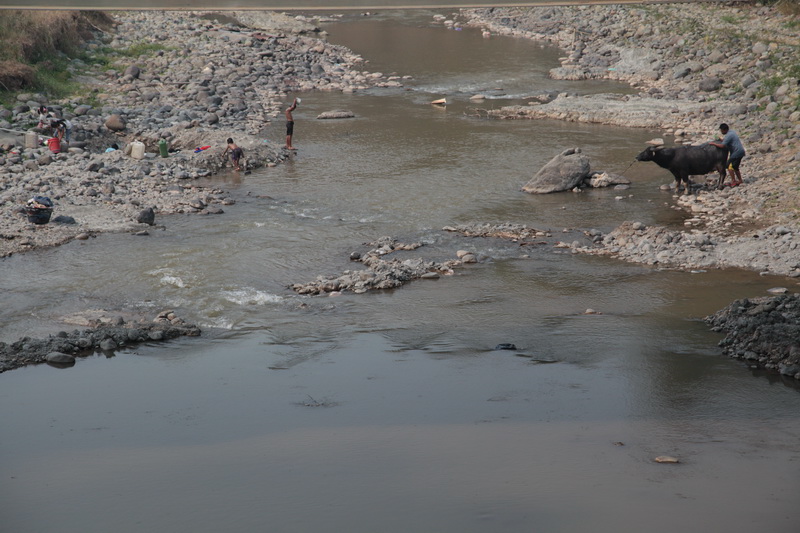 Another stretcher to lay out the coffin 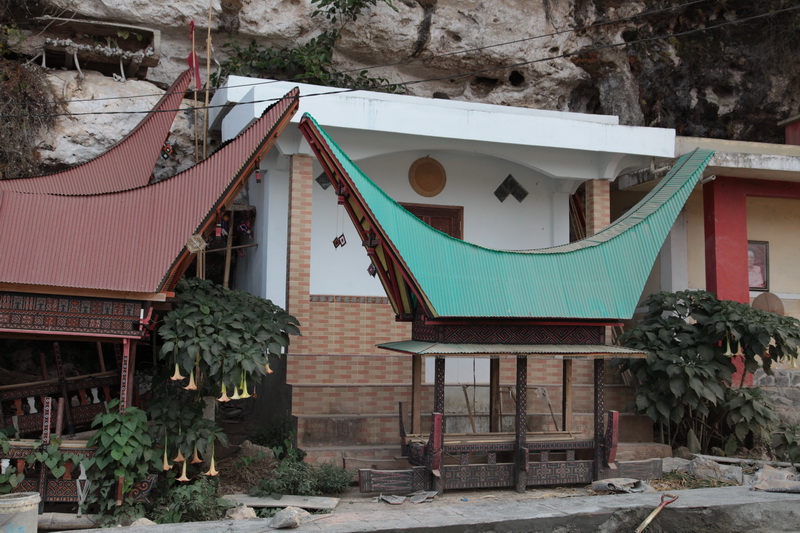 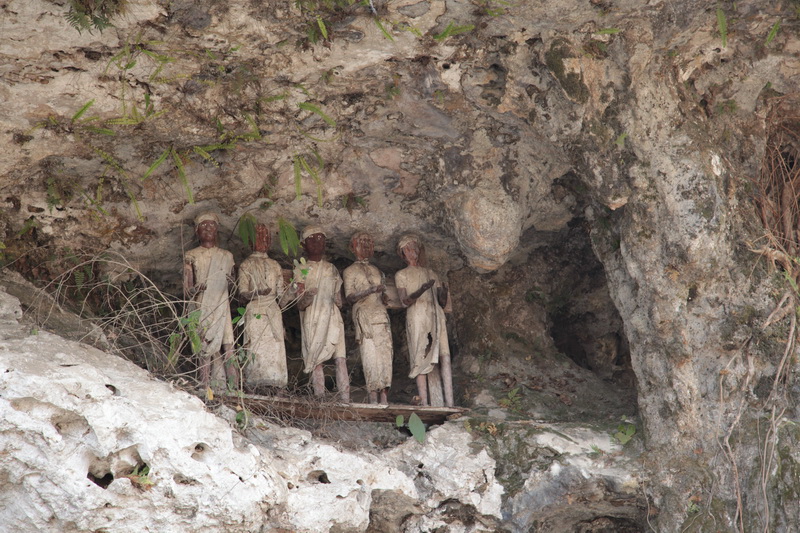 This was a weird village… because there were several burrial houses that are still empty. The families build them when they have money and then they don’t have to worry where they can be burried when they die…. 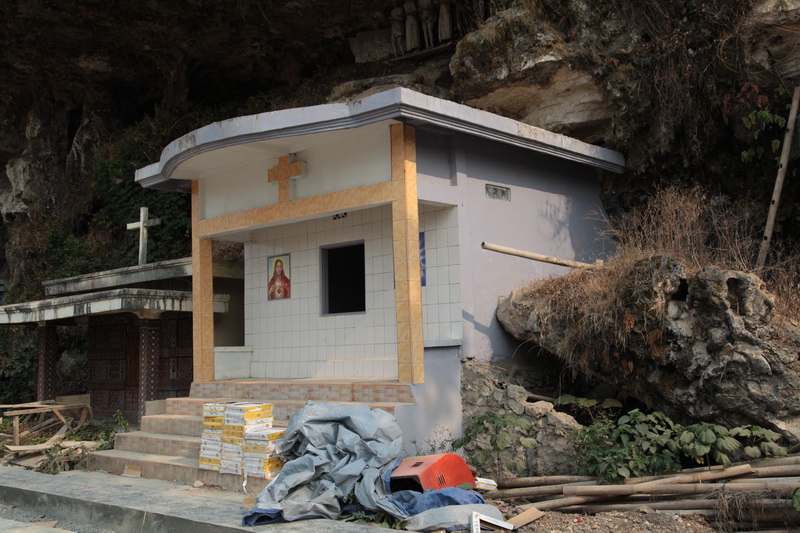 And here I was a bit lucky… my guide told me that they are building a new house and do pig-offerings every day. While we approached I heard a pig squealing loudly. And when we arrived it was already dead. So I didn’t have to witness another slaughter… 🙂 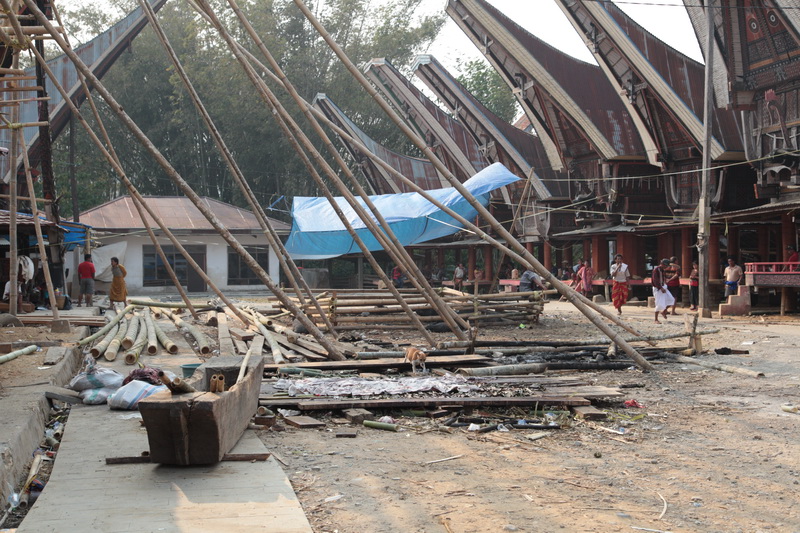