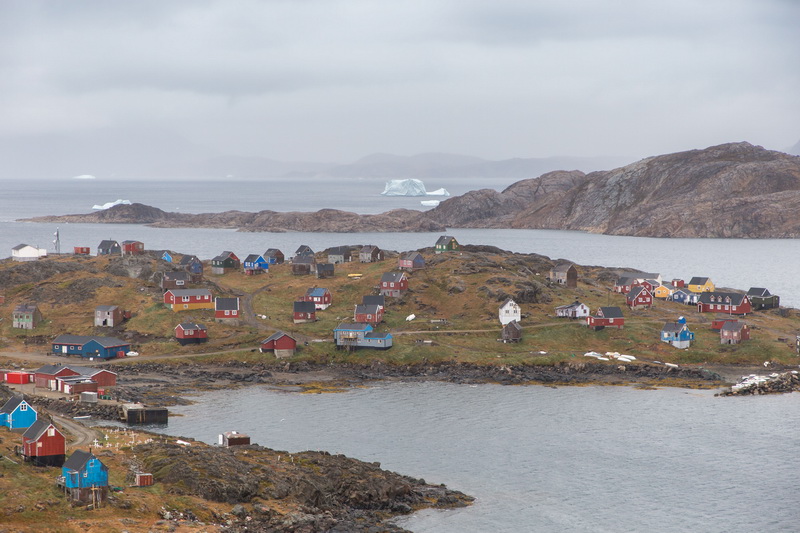 On the last morning we went a last time around the iceberg cemetery and I had to say good-bye to my favorite iceberg with the pool in the middle. I should have brought a drone too because Galice took stunning pics from above…

At noon the boat came in to get us and we were on our way through an inland fjord to Kulusuk. I didn’t take any pics during the trip although we saw a whale again. But the weather was just too bad. Once arrived in Kulusuk we checked in at the hotel. It was raining hard… I didn’t want to stay in my room the entire afternoon, not with geocaches waiting for me. So I left the hotel and met Marion and Falk outside who just came back from a walk to the actual village of Kulusuk which was about 2 km away. Marion was all in for geocaching so we started to walk towards the airport but it was further away than I had thought and we had to go there the next day anyway. So went turned around and walked in the other direction towards Kulusuk . Next to the road on top of the hill is a cemetery where we went to log a geocache. The place was really nice because from up there we had a wonderful view over Kulusuk and the open sea behind with a few icebergs. When we got back to the hotel it started to rain hard again and happy hour had started so the group gathered and we were mostly working on pictures.
The next morning we still had time till our flight was supposed to leave but it was raining too hard to do anything. We brought our luggage early to the airport which gave me time too to log the geocache there. 😉

When we arrived at the airport we heard from other groups that it had been a good idea to go to Kulusuk early because that day no boats were out on the sea and the people from Taliisaq had to take the helicopter – which was really late so hopefully nobody missed the flight. Somebody told me that the next free seat on a flight to Reykjavik would have been three weeks later.

Flight back to Reakjavik was a bit bumpy but otherwise uneventful. Once arrived in Reakjavik we had to say our good byes to the group before we each headed to our hotels.

Before I put in the pics from the last days please let me thank the group… we had a wonderful time together, everyone was friendly and helpful. Falk cooked several times and Wolfgang and Andreas were taking over washing plates etc. after the meals. Doesn’t mean nobody else did anything but basically everyone chimed in when something had to be done.

And then of course Sven and Anja from Northern Explorers. This was my 6th tour with them and will leave for the 7th in a few weeks. 😉 I think that says it all. Thank you for what you do – it has enriched my life and some of the people I met during these tours have become real friends. Apart from the fact that I had a lot of wonderful experiences during the trips with you. 🙂