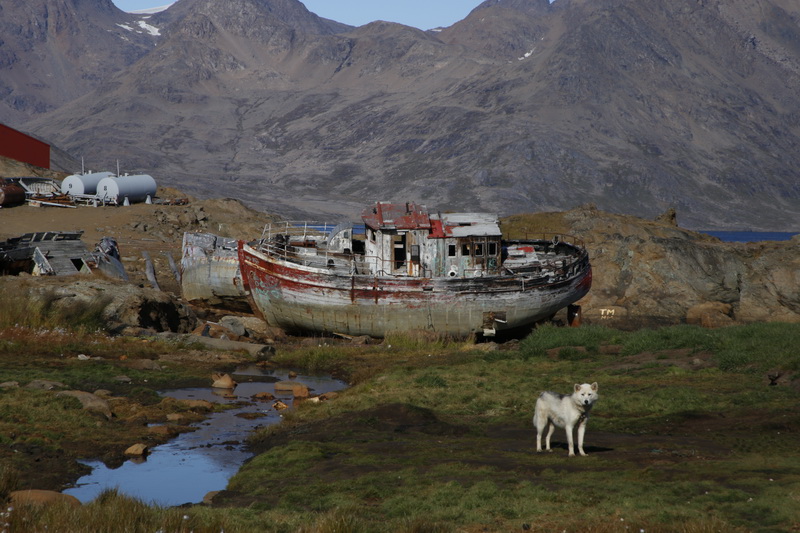 Let me explain a bit more about Greenland… the day we arrived was saturday which was payday. Sadly the money is used to buy alcohol and the inuit drink too much. We saw them in the middle of the streets sleeping it off. Our house was next to the main street that lead to the hill and we often saw someone staggering drunkenly up the hill. Sad… Another thing is that in Greenland they still chase whales. It saddens me but I am a guest in their country so I have to accept what they have done for generations. Doesn’t mean I have to like it though.
In the morning I remained behind again while the group went diving in a nearby fjord again and went geocaching with the other non-diver. It was lucky that Marion does a bit of geocaching too so we went to the helipad to find them. It was a nice walk and the flowers were blooming… 🙂
In the afternoon we went whalewatching. While close to the shore we saw humpbacks and finn whales at one point we saw a boat tugging in a mink whale that they had hunted. I really had no clue HOW they hunt the whales but we became to testify the actual hunt later when we went out to see pilot whales. The hunters are shooting them… 🙁 Don’t know how many whales got shot and survive and how many they actually are able to kill. While we were around there might have been some with shooting wounds but none were killed.
That evening we had to pack because the next morning we moved on. But that is a story to tell for another day. 😉