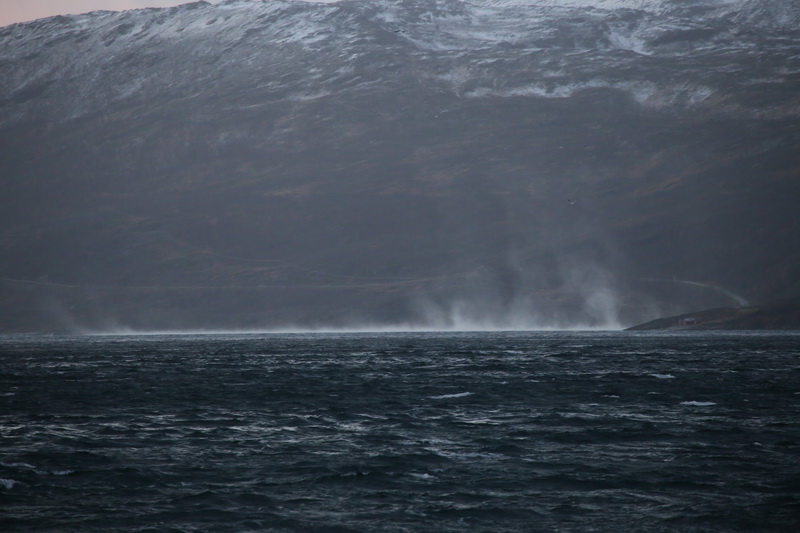 The next days were still full of whales but the weather was not really good. Although it could have been worse with more rain. So the grey clouds did not make the days longer. It was pretty obvious that the days got shorter very fast. It was stormy again one day and we had water tornadoes dancing over the water. And for once the humpback was not jumping behind my back. 🙂 Julian came down and told us that a humpback had just jumped in front of the boat. So we went up again and a few seconds later the whale jumped again. I was not fast enough to catch him when he was fully out of the water (he didn’t come out entirely anyway I think). One humpback that we saw had only half of his fluke left. Since it looked like cleanly cut off we think that he must have been hurt by a boat.
At one point we had a group of about 20 humpbacks swimming parallel to our boat and right next to us. I took a video with my mobile of that as pictures would never have caught that appropriately. In the evenings we hoped for Lady Aurora again but although we had clear skies she would not show herself. But the full moon was impressive on our last evening.
The trip back home was an adventure again as we flew out of Sorkjosen at the peak of storm warning red in a little plane. I am usually relaxed when flying but there were some moments that I was rather un-relaxed. It was an experience that I prefer not to repeat. But boy – those pilotes sure know how to fly… The rest of the trip didn’t go that well either but in the end I made it home. Here are the last pics… If you want to go through them in full size click on the first one and then you can navigate to the next one.